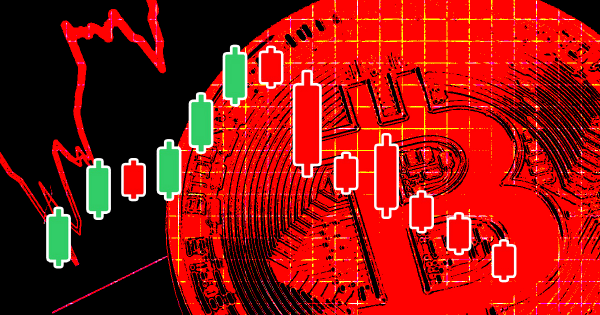 Bitcoin has closed its weekly candle down, thus making this the 7th week in a row that it has printed a weekly red candle.

Several times, it has trended down for many weeks on end. However, there have been brief moments of reprieve within those downturns not currently present in today’s market.

A red candle is when the price at the end of the designated timeframe, here a week, is lower than it was when the candle opened. Bitcoin needed to close above $33,928 to avoid the historic 7th weekly red candle.

While there has been a 22% upswing since the local bottom of $25,406, Bitcoin closed the week several thousand dollars below its target. Many believe the downturn indicates that we are now officially in a bear market.

According to top Wall Street analysts, there could be more pain ahead with the currently accepted correlation between traditional stocks and Bitcoin. Morgan Stanley Chief Investment Officer Mike Wilson claimed,

“stocks appear to have begun another material bear market rally. After that, we remain confident that lower prices are still ahead. In S&P 500 terms, we think that level is close to 3,400, which is where both valuation and technical support lie.”

In 2014, Bitcoin went on a 14-week decline but experienced three green candles during the period. The green candles were far from bullish printing doji, star, and spinning top candlestick patterns often believed neutral in sentiment.

In this 14-week downward spiral, the green weekly candles were hours away from turning red. Regardless, this week is the only time there have officially been seven red weekly candles in a row. The price has also broken long term support at $29k, meaning many fear the price could drop further. with Rekt Capital posting,

After all – it’s a first time ever occurrence

Neither of them marked out a generational bottom