Billionaire Winklevoss: Ethereum is easily the most underpriced crypto

Cameron Winklevoss, the co-founder of Gemini and the billionaire Bitcoin investor, believes Ethereum is the most underpriced cryptocurrency at the moment. 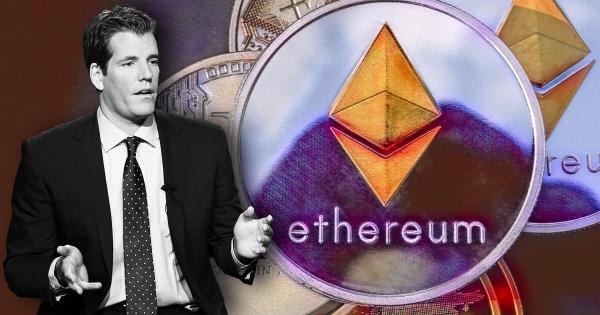 Cameron Winklevoss, the co-founder of Gemini and the billionaire Bitcoin investor, believes Ethereum is the most underpriced cryptocurrency at the moment.

Winklevoss emphasized that Ethereum is 50% away from its all-time high at around $1,400. In comparison, BTC has already surged nearly 50% from its previous record-high. He wrote:

“Ether $ETH is 50% off of its all-time high. It’s easily the most underpriced crypto in the word right now.”

There are several key reasons to be optimistic about Ethereum in the medium to long term.

First, the number of whales accumulating Ethereum have increased, according to Santiment.

Analysts at Santiment said that the number of whales holding Ethereum has increased in the past two months. They said:

“With $ETH crossing $750 for the first time in 31 months, we’ve discovered that there are 39 more #Ethereum addresses holding 10,000+ $ETH compared to just 2 months ago. Meanwhile, the amount of addresses holding 1-10,000 $ETH have shrunk over this time.”

This trend shows that the confidence among long-term holders and high-net-worth investors is increasing.

Second, Eth2 has launched, which would scale the Ethereum blockchain network significantly over time. This would enable decentralized finance (DeFi) to grow exponentially over the upcoming years.

The total value locked in DeFi has surpassed $14 billion, after it peaked at $16 billion. If Ethereum gets cheaper to use through Eth2, DeFi would be able to grow much faster.

Based on the strong fundamentals of Ethereum and increasing accumulation of ETH by whales, investors are generally positive about ETH.

Tyler Winklevoss, the CEO of Gemini, said he has had a large holding of Ethereum for many years. He said:

“We’ve had a big bag of $ETH for many years. @Gemini was the first exchange in the United States to list ether in 2016 ( @NYDFS approved no less). Happy new year!”

What’s next for ETH?

CME, which has become the largest Bitcoin futures exchange by open interest, is set to list Ethereum in February.

The confluence of the CME listing, whale accumulation, and the generally positive sentiment around Ethereum as a store of value could drive up the price of ETH.

“The long-term value of $ETH as gas is: 1) creates durable, utility-driven demand (not just memes) 2) being needed by all users enhances overall ubiquity & desirability 3) burning mechanism (under EIP-1559) destroys supply All of these reinforce ETH’s role as a SoV.”

Technically, Ethereum faces a strong resistance level at $840. But above it, there is little resistance until $1,000 and ultimately, its record-high above $1,400. The key in the short-term is to maintain the current momentum and avoid a drop below $700.