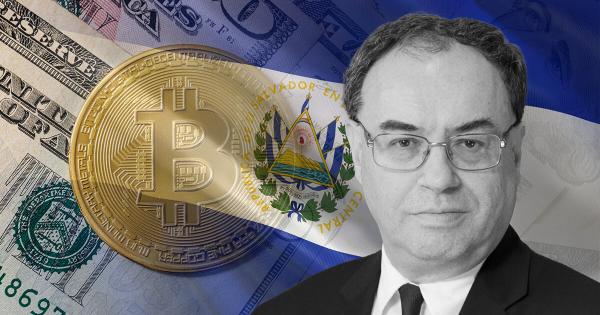 Speaking at the Cambridge University students union on Thursday, Bank of England Chief Andrew Bailey expressed worry for the citizens of El Salvador following the country’s adoption of Bitcoin as legal tender.

Bailey said the move to adopt Bitcoin within a dual currency system was concerning, while also adding that volatility would impact most detrimentally.

This isn’t the first instance of Bailey warning of the “dangers” of cryptocurrency. In May, Bailey said cryptocurrencies have no intrinsic value and that investors should be prepared to lose all their money.

El Salvador made history on September 7, as the first country to accept Bitcoin as legal tender.

The move has greatly divided opinion, with international legacy agencies, such as the IMF and World Bank, voicing their disapproval.

But President Bukele remains committed to the cause saying it will bring more jobs, financial inclusion, and foreign investment.

Earlier this week, El Salvador announced plans to build a Bitcoin City at the base of the Conchaga volcano located in the southeastern region of the country. Related to this is the issuance of “volcano bonds,” which would provide development funds to the Central American country.

Stock added that El Salvador’s Bitcoin experiment is “an untested strategy,” and that there’s every likelihood that the country will continue to need IMF support.

“Building the economy around crypto mining and attracting crypto businesses is an untested strategy to put it mildly.”

What did Bailey say?

Also expressing his skepticism over El Salvador’s Bitcoin experiment, Bailey said it was concerning that a country would choose to go this route. He added that he worries most for the citizens of El Salvador due to the volatile nature of Bitcoin.

“It concerns me that a country would choose it as its national currency. What would worry me most of all is, do the citizens of El Salvador understand the nature and volatility of the currency they have.”

Not dismissing digital currencies entirely, Bailey said there’s a strong case for them. However, only in the context of a stable currency.

Speaking on the day Bitcoin became legal tender in El Salvador, IOHK CEO Charles Hoskinson framed the situation as a blow for legacy agencies, adding that in many cases, these agencies are “adversial” to everyday people.

The new schools constructed will support the cryptocurrency expansion in the nation and assist in educating the locals about the essentials of cryptocurrency trading. 2 min read

There are roughly two weeks left until Bitcoin (BTC) starts circulating the mainstream space as a legal tender in El Salvador. 2 min read