Worldcoin wants to scan your eyeballs. But its founder says that’s the ‘future of privacy’ Ana Grabundzija · 1 year ago · 2 min read
News › Privacy

Worldcoin wants to scan your eyeballs. But its founder says that’s the ‘future of privacy’

In order to ensure an equitable distribution of the new cryptocurrency, Worldcoin opted for using biometrics.

Photo by Nathan DeFiesta on Unsplash

The project claims to be committed to giving Worldcoin to everyone on Earth, but, according to the official launch report, the legal uncertainty in places like the US and China currently prevents the deployment of Orbs in these countries.

“The more people there are that collectively hold and use the same currency, the more useful that currency becomes for each participant,” explained the project, noting that true benefits of decentralized, collective ownership can’t be achieved without widespread, global adoption.

In order to align the incentives of all participants and allocate the majority of Worldcoin to new users as a reward for joining the network, the project opted for a coordinated distribution design, which relies on custom biometric devices called Orbs.

Orbs are used to verify the uniqueness of a person through iris recognition, while preserving privacy through zero-knowledge cryptography, the project claims.

“It is core to the mission of Worldcoin that the network is not run by a single entity, but instead by entrepreneurial individuals all around the world who apply to receive an Orb to run independent operations in their communities,” read the launch report, clarifying how the so-called Orb Operators have been given the autonomy to build their operations from the ground up, including running their own marketing campaigns and collaborating with local partners.

The project already onboarded twenty-five operators, currently running more than thirty devices in twelve countries across Africa, South America, Europe and Asia. This enabled the project,  which hopes to hit the 1 billion user milestone by 2023, to already amass over 100,000 users globally.

New users joining the network are not required to share any personal information like name, email address, physical address or phone number.

“​​A user claims their free share of Worldcoin by visiting an Orb. The Orb captures an image of both of the user’s eyes. This image is immediately converted via an irreversible function to a unique identifier and then permanently deleted,” explained the project, adding that It is not possible to recreate the original image of a user’s eyes from their unique identifier.

And while the project claims that Worldcoin’s distribution design “requires as little personal data as possible and preserves the privacy and anonymity of its users,” notorious whistleblower Edward Snowden warned about possible future implications of creating such a database.

This looks like it produces a global (hash) database of people's iris scans (for "fairness"), and waves away the implications by saying "we deleted the scans!"

Yeah, but you save the *hashes* produced by the scans. Hashes that match *future* scans.

“Don’t catalogue eyeballs,” responded Snowden in a tweet, as he called out the project for producing a global (hash) database of people’s iris scans in the name of “fairness.”

The famous privacy advocate noted that, despite the scans being deleted, the *hashes* produced by the scans remain catalogued.

“Hashes that match *future* scans,” reminded Snowden, as he continued to caution about the use of biometrics. 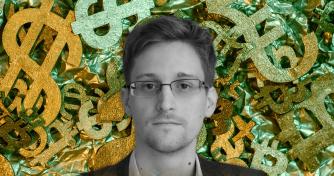 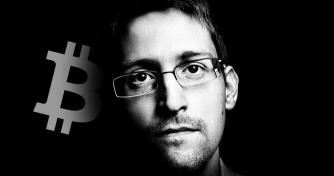 Edward Snowden: ‘this is first time in a while I wanted to buy Bitcoin’ for this reason