The demand for transactions on the Ethereum blockchain is at its lowest level since summer. This low demand comes when the price of ether once again drops below $3,000. 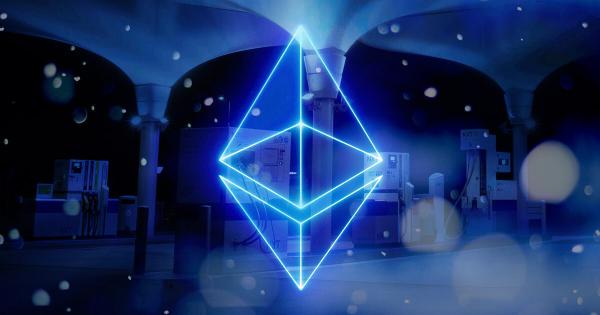 The price of ether (ETH) is back below $3000 trailing bearish movement in the general crypto market, following negative macro sentiments, most of all the threat of war in Ukraine.

Zooming out, there is no lack of positive development surrounding the Ethereum ecosystem. Total Value Locked (TVL) in DeFi is still above the $200 billion mark, despite a drawback from levels above $250 billion in November last year – levels that correlate with ether’s all-time-high market value at $4878 on the 10th of November 2021.

Also, the fact that KPMG in Canada added, not just bitcoin, but also ether to its balance sheet is nothing short of a clear recognition of Ethereum as an investment asset, even for risk-averse enterprises like KPMG.

Furthermore, Ethereum adoption is not only about big players. According to data from IntoTheBlock, the number of addresses holding between 0.1 and 1 ETH is currently at an all-time-high. In the span of one year, the number of these addresses increased by 98% and at the moment they collectively hold 1.78 million ETH, a number that has increased by 4.54% in one month.

On the other hand, the NFT market seems to have slowed down since the top in the last week of January. 2022 has so far seen record-breaking NFT market activity, but according to market data from Nonfungible.com the number of sales is down from near 64,000 sales per day in mid-January to almost 24,000 on Sunday. Sales in dollar terms are down from $160 million on the 31st of January to $75 million on Saturday.

With ether dropping back below $3,000, the demand to make transactions on the Ethereum blockchain has stayed relatively low, according to data from Santiment. As demand for transactions is trending down, so is the market price of blockspace. Transaction fees are now officially at their lowest level since the 28th of July last year.

At the moment of writing, gas fees on the Ethereum network are below 40 gwei even for fast transactions with confirmation times well under 30 seconds. Since the 10th of January when gas prices hit a local top at over 218 gwei, the past month has seen a clear downward trend in gas prices.