The short and sad story of $FEW, an unsuccessful attempt to recreate $MEME News Desk · 2 years ago · 5 min read
This article is more than 2 years old...
News › Ethereum › DeFi

A group of around 50 crypto influencers was busted in an unsuccessful attempt to pump $FEW after screenshots of their closed Telegram group surfaced on Twitter. 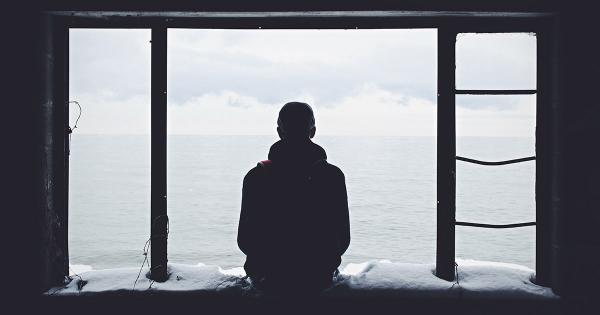 Photo by Noah Silliman on Unsplash

A group of around 50 crypto influencers was busted in an unsuccessful attempt to pump $FEW after screenshots of their closed Telegram group surfaced on Twitter. And while the token failed to launch, the intent behind the group—to recreate the massive success the $MEME coin saw—remains clear.

While most prominent members of the group said that the project was a joke gone wrong, critics claimed that it was symptomatic of DeFi’s biggest problem—shilling scams.

After the launch of Uniswap’s governance token UNI shook the crypto industry to its core, the greed and FOMO felt by most of the DeFi space seems to have hit critical levels. With millions of dollars in what can essentially be called “free money” available at every corner, more DeFi projects looking for quick profits began popping up in.

The latest one to make a dent in the news cycle is FEW, an ambitious but rather unsuccessful attempt to recreate the huge success seen my MEME last month—the token skyrocketed to around $2,000 this week after being dropped to few members of a closed-off Telegram group. The 355 MEME tokens the members received were worth around $700,000 at their peak earlier this week. The MEME token airdrop is worth over $250,000 at the time of publication.

Leaked screengrabs of the Telegram group where FEW was fist discussed showed that the project was created by people who were trying to recreate the success of MEME. The token, which at the time the messages were sent didn’t actually exist, was called a “flash mob project” with a blank slate.

The messages, leaked by multiple sources, show that the project was launch without a plan, but with a clear intention—to airdrop the token to the group’s members which would then promote it on Twitter.

However disingenuous, these kinds of Telegram groups and messages are nothing new in the crypto industry. What did come as a major surprise to everyone were the people involved with the group, some of which are considered to be the biggest “influencers” in the DeFi space.

DeFi Dude, an anonymous crypto personality involved with Aave and Kyber protocols, Anthony Sassano, a marketing expert with the Set Protocol, Steve McKie, the founder and managing partner of Amentum, and Alex Soong, the co-founder of Set Protocol, were just some of the DeFi names that were active in the group.

Screengrabs made about an hour and a half into the group showed that it saw a massive jump in members in a short period of time, with hundreds of people joining obviously interested in the prospects of getting into FEW.

However, as more people entered the group, some technical questions about the coin began popping up—such as does it even exist?

Screengrabs shared by Taylor Monahan, the founder, and CEO of MyCrypto, showed that people began asking questions about FEW’s listing on Uniswap and who would provide liquidity for the coin.

Now, watch how fucking fast this happens. At 2:30 there are still less than 100 people.

At 2:36 a flood of ppl enter from a link somewhere. And the entire chat is now faceless.

As people began to realize that FEW wasn’t listed on any exchange, someone took the opportunity to profit from the buzz and listed a fake FEW pair on Uniswap, hoping to lure unsuspecting members to trade.

But, as quickly as the project gained traction within the group it exploded on Twitter. When faced with the angry mob of die-hard defenders of DeFi purity, most people dismissed the accusations of shilling an obvious scam. Most claimed that the entire project was an experiment, a “joke in a small room of people” that was never meant to promote a scam.

However, such jokes do not come free from consequences. People actually ended up buying the fake $FEW token seeing their favorite influencers talk about it. With great power, comes great responsibility. The shillings by DeFi influencers can financially affect their followers.

Anthony Sassano took it as far as sending his FEW tokens to a burn address to prove that he wasn’t going to dump them on anyone.

Since this screenshot is going to circulate like crazy I want to get one thing straight – it was me making a joke when this group was just a few people.

I just sent my $FEW tokens to the burn address to prove that I'm not going to "dump" on anyone.https://t.co/gcR0wM43s2 https://t.co/SWLKjWFcWg

He later explained that he wasn’t all that involved in the group and didn’t think of it as a scam “ given that there were familiar names in the chat.” While he acknowledged that the “I was just joking” defense was a weak one, he stood by his claim that his intentions were never to participate in a scam. He was also one of the few influencers involved that publicly apologize.

5/ For those that I disappointed, I apologize.

This incident has made me reflect on my involvement in the community and will help me to improve how I interact going forward.

However, Sassano’s initial tweet was cleverly crafted to get people to buy $FEW. 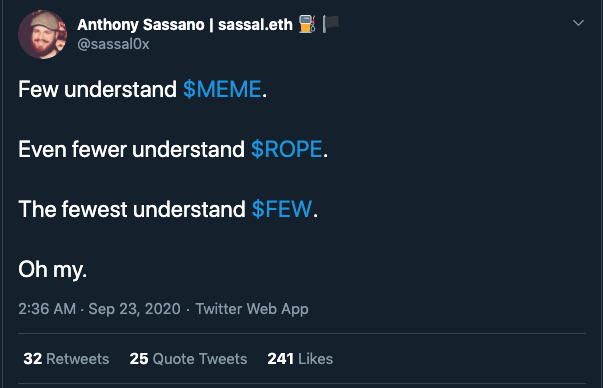 Alex Masmej, the group’s administrator, said that no harm was done as the token was never listed, adding that he, too, had burnt his FEW tokens.

Alex was not only the admin of the Telegram group, but was also involved in inviting users in the group.

Sam Ratnakar, the co-founder of IdeaMarket and the brain behind FEW, said that the project started as an experiment—get a few of the industry’s “smartest people” together, distribute tokens, and see what happens.

It started when I invited a few people to join an experiment.

Get some of the industry’s smartest people together, equally distribute tokens and see what happens.

The telegram chat was called “The Experiment”. pic.twitter.com/37sWGATQ6j

Ratnakar said that the group brought together “really cool people” like CoinShares’ Meltem Demirors, Variant Fund’s Jesse Walden, and Matic Network’s Jaynti Kanani within a few minutes. The first 52 “holders” were airdropped 762.23 tokens, with 2,000 FEW left aside for liquidity and multi-sig for DAO members.

“This project was created as an experiment to create value for the ecosystem,” Ratnakar said on Twitter. “Within a few hours, we’ve had the whole industry’s attention and so much mindshare.”

The repercussions of dishonesty

The short and sad story of FEW would have come to a quick end if wasn’t for the relentless crypto community on Twitter. The fact that almost everyone involved with the group immediately began pushing the joke defense seems to have angered even those that usually aren’t active in the DeFi space.

Most critics agreed on one thing—even if the whole thing was a joke, it was an ill-fated one that’s indicative of the current state of DeFi. If such a low-effort thing managed to gain so much attention and see its value skyrocket within minutes, then the influx of high-profile projects such as YAM show that the DeFi space is not going to be a long-lasting one.

Whatever the true goal of FEW was, one thing remains clear—it is, in essence, just another brick in the long wall of pointless decentralized finance experiments. What FEW proved was that the voices that gave it any merit should be seen as equally pointless. 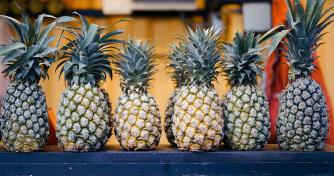 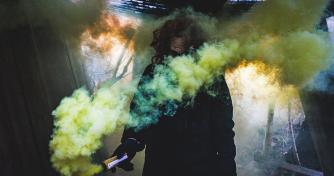 END_OF_DOCUMENT_TOKEN_TO_BE_REPLACED

Meme is an experimental protocol mashing up some of the most exciting innovations in DeFi and crypto collectibles.

END_OF_DOCUMENT_TOKEN_TO_BE_REPLACED

Taylor Monahan is the founder & CEO of the popular Ethereum wallet MyCrypto.