Crypto company SpaceChain is behind that payload. It says the move helps with greater security of the Ethereum and wider adoption. 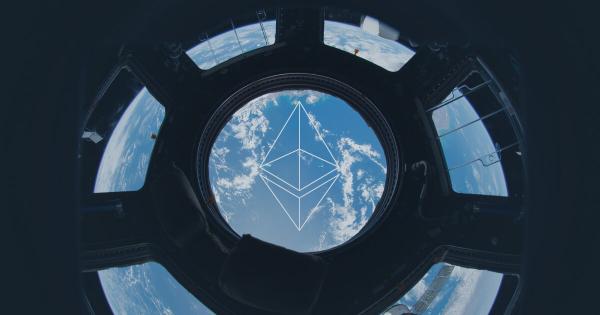 Nexus, a client of SpaceChain, provided the ISS with the installation solution required for the Ethereum node.

Ethereum to the moon?

The Singapore-based SpaceChain builds out blockchain protocols and networks in literal space, additionally offering ‘space-as-a-service’ for businesses looking to do crypto or blockchain stuff high up there.

And it may sound as a futuristic joke to some, SpaceChain’s serious about its aspirations. “Catch the live launch of CRS-22 in approximately 2 hours, where our #ETH multisig will be on board. This will be SpaceChain’s first commercial launch,” it said in a tweet yesterday.

Catch the live launch of CRS-22 in approximately 2 hours, where our #ETH multsig will be on board. This will be SpaceChain's first commercial launch! #BlockChainISShttps://t.co/1gtxSNdnns

“The nodes will be installed on a YAM-2 satellite carried by a SpaceX Falcon 9 rocket under the rideshare program. The mission will be operated by Loft Orbital”, the firm explained in a release last week.

As per tech publication TweakTown, the Ethereum node was placed on SpaceX’s Falcon 9 rocket and was the fourth blockchain payload to enter space. The move is said to be a “demonstration of the integration of Ethereum technology into its hardware on the ISS.”

But why do that? As per SpaceChain, the space node increases the overall security of the Ethereum network, enabling users to utilize the world’s most-used blockchain in a truly private, self-sufficient, and trustless manner.

Some in the crypto space said the launch was a ‘starting point’ for wider blockchain adoption. “SpaceChain gets Ethereum multisig in space with SpaceX with commercial capabilities as a starting point for wider adoption of blockchain for enterprise business and fintech applications,” stated crypto and tech investor Tim Draper in a tweet.

Cool. @SpaceChain gets #Ethereum multisig in space with @SpaceX with commercial capabilities as a starting point for wider adoption of blockchain for enterprise business and fintech applications. @draper_u
alum#BlockchainISS #newspaceeconomy #draper ecosystem

Meanwhile, SpaceX’s crypto payloads aren’t ending here. The company will be using its Falcon 9 rocket for another trip to the ISS later this month carrying three nodes created for crypto firms Biteeu, Divine, and Nexus Inc.

But that’s nothing like what’s going to happen in 2022. SpaceX has been contracted to carry a payload, a mission which saw the Elon Musk-owned company paid in memecoin Dogecoin.