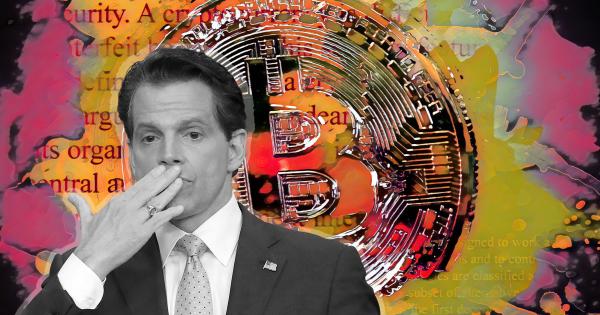 Speaking to Forbes, Scaramucci states that both he and his research team were initially skeptical of Bitcoin. However, following a three-year evaluation process, he concluded it’s “better at being gold than gold.”

How Bitcoin won Scaramucci over

In overcoming his initial doubts about Bitcoin, Scaramucci considered the situation from multiple angles. Taking a leaf from Warren Buffett’s thinking style, he didn’t want to invest in something he didn’t understand. Also, there were lingering concerns it could go to zero.

Nonetheless, over time, he concluded it was an investment opportunity of a lifetime. He gives three reasons for this change of heart. Firstly, Scaramucci draws attention to the thousands of rival blockchains that have come (and gone) since 2009, yet all have failed to displace Bitcoin as the leading cryptocurrency.

“if you look at bitcoin’s market capitalization relative to everything else out there, it’s dwarfing everything, closing in on $1 trillion.”

As well as that, Scaramucci describes BTC as an “impregnable” exchange between two human beings, which he sees as money reimaged for the 21st century.

And finally, his observations of modern society highlight how technology has formed networks. These networks, he says, have tremendous value. He points to examples, including Amazon as the retail network and Facebook as the social network. And he considers Bitcoin as the monetary network.

“Bitcoin is a monetary network. Looking at what has happened in the 21st century, we’ve seen the evolution of a retail network that’s known as Amazon. We’ve seen the revolution of a social network called Facebook. We have a search and advertising network known as Google.”

His closing comments state that Bitcoin can act as an alternative store of value to gold. But, in his opinion, Bitcoin is the better choice.

Gold is on tilt

Scaramucci didn’t elaborate on why he believes Bitcoin is better than gold, but there are numerous points to be made here.

The supply of gold is unknown; this is compounded by the fact that mining firms can discover new gold reserves. There will only ever be 21 million BTC, and this makes Bitcoin a harder asset than gold. Others point to Bitcoin being apolitical. But perhaps the biggest advantage is more convenient storage and better portability.

Since the start of 2021, Bitcoin has outperformed gold. Over the last five weeks, gold has lost 8%, with today, in particular, being a horrible day for gold bugs. In contrast, Bitcoin is up 14% over the same period.

Peter Schiff sees no fundamental reason for the sell-off in gold. He attributes it to whales picking on the little guy.

#Gold is getting hammered. It's down $40 per ounce, trading back below $1,800. #Silver is down $75 cents per ounce, back below $26. Despite extremely bullish fundamentals and news the big guys are determined to teach the little guys a lesson by shaking them out of the market.

Nonetheless, based on today’s price performance, Bitcoin has proven to be better at being gold than gold.