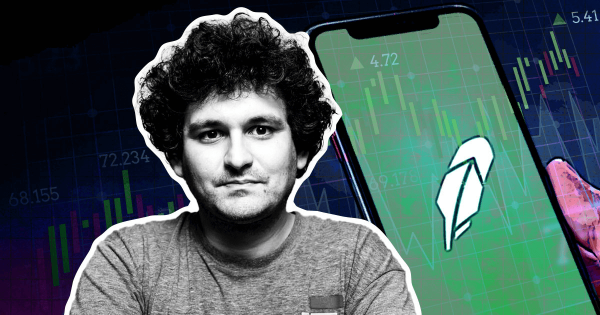 Sam Bankman-Fried, the founder of FTX and Alameda Research, has acquired a 7.6% stake in Robinhood.

SBF’s acquisition triggered an aggressive market response, with Robinhood’s shares jumping as much as 36% in extended trading. And while prices have pulled back since Thursday evening, they’re still up around 25%.

According to a filing with the U.S. Securities and Exchange Commission (SEC), SBF acquired the stake through Emergent Fidelity Technologies, in which he owns a majority stake.

The company, registered in Antigua and Barbuda, bought just over 56.2 million shares of Robinhood, representing 7.6% of the company. The shares were purchased using Emergent’s working capital for $648.3 million.

Based on the May 12 closing price of $8.56 a share, SBF’s position was worth roughly $482 million. However, he might be able to erase his losses, as data from Bloomberg showed the stock rose as high as $10.46 in pre-market trading in New York.

While SBF noted in the disclosure that he intends to hold the shares as an investment and not influence the company, his position comes at a crucial time for Robinhood. The company has been struggling with losing market dominance as its shares dropped 77% since its controversial IPO in July 2021.

Robinhood saw its popularity explode in 2020 during the pandemic, managing to capture a significant part of the newly emerging retail trading market. The vast popularity meme stocks and cryptocurrencies saw on the platform enabled it to amass 22.7 million users by the end of last year, which cemented Robinhood as a force to be reckoned with in the retail market.

However, despite its rising number of users, trading activity on the platform has been steadily declining, and the company has been struggling to keep volumes up and maintain its revenue stream.

Robinhood indicated that cryptocurrencies would be one of its top areas of focus for growth this year, as revenue from crypto trading made up 18% of its total net revenue last quarter. With the support of SBF, who indicated in his disclosure that he might take a more active role in the company in terms of strategic initatives, Robinhood has the fuel to expand to the crypto market even more.

And while neither Robinhood nor SBF has directly commented on the news, Robinhood shared a statement on its official communication channel saying it was “doubling down on creating a multi-generational company where customers can build wealth for their generations.”

“Of coursse we think it is an attractive investment too,” the company said in a tweet. “We have the best customer base, are introducing great new products, and we have the team to deliver.”

Our journey is just beginning.