Ripple CEO Brad Garlinghouse’s motion to obtain access to international discovery has been granted by the court. 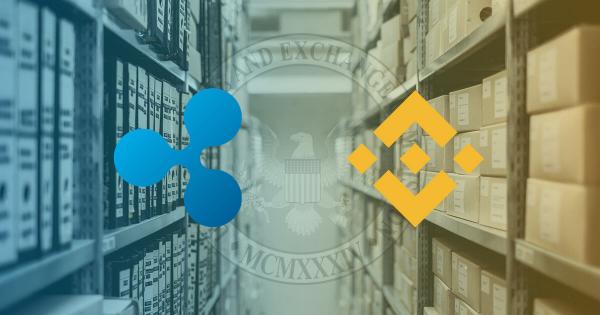 Ripple’s lawsuit with the US Securities and Exchange Commission (SEC) involved one of the largest crypto exchanges in the case discovery as Brad Garlinghouse’s motion to obtain Binance documents from the Cayman Islands has been granted by the court.

Garlinghouse’s motion came as a part of the ongoing court case filed by the SEC, alleging that Ripple’s sale of XRP was an unregistered security offering worth more than $1.38 billion.

According to the SEC’s amended complaint, Ripple CEO Garlinghouse sold more than 357 million units of XRP to “public investors in the market,” specifying the offers and sales were made on “worldwide” digital asset trading platforms as XRP was sold to investors “all over the world,” while violating Section 5 of the Securities Act of 1933.

#XRPCommunity #SECGov v. #Ripple #XRP Brad Garlinghouse files a second Motion to Obtain International Discovery. I haven’t had an opportunity to see if it is duplicative of today’s earlier filing but it was docketed separately. https://t.co/OAmO4qmZSPhttps://t.co/ZN81yOn5TH

“Mr. Garlinghouse seeks foreign discovery on the basis of his good faith belief that the listed entity possesses unique documents and information concerning this case, and specifically concerning the process by which transactions in XRP were allegedly conducted by Mr. Garlinghouse on foreign digital asset trading platforms were conducted,” read the memorandum filed in support of Garlinghouse’s motion.

According to the memorandum, the securities act only applies to domestic sales and offers, thus contrary to SEC’s claims of global violation, it implies the regulator can only prosecute services in the US, while the majority of “overwhelming” XRP sales were conducted abroad.

“The Supreme Court has held that Section 5 of the Securities Act of 1933, which the SEC alleges Mr. Garlinghouse violated, applies only to domestic sales and offers of securities.”

According to defense lawyer James K. Filan, the Garlinghouse’s Motion to Obtain International Discovery has been granted by the court.

International discovery can serve as proof for invalidating SEC’s claims under Section 5 of the Securities Act of 1933 and potentially lead to winning the motion to dismiss by the defendants.

“In the case of transactions conducted on such foreign trading platforms, both the offers of XRP and the sales of XRP occurred on the books and records of the respective platforms, and therefore geographically outside the United States. The SEC’s failure to allege domestic offers and sales should be fatal to its claims for the reasons set out in Mr. Garlinghouse’s Motion to Dismiss,” read the memorandum filed in support of the motion.