Ripple CEO Brad Garlinghouse sent a message to crypto investors as the total crypto market cap lost 20% of its value, 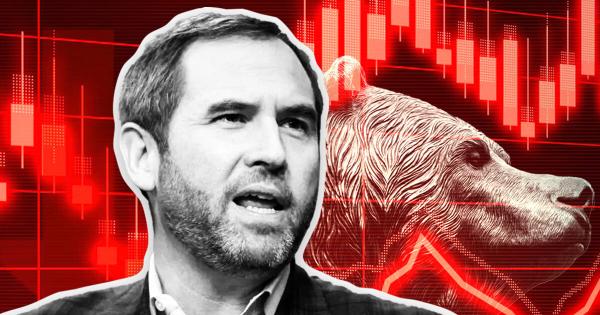 Ripple CEO Brad Garlinghouse took to Twitter, offering his commentary on the crypto crash of the last 48-hours.

Crypto investors fled in fear of rising inflation and the developing situation at lending and borrowing platform Celsius. Over this period, the total crypto market cap lost 20% of its value to bottom at $893 billion in the early hours of Tuesday morning (GMT).

The Dollar Index, which measures the U.S dollar against the currencies of America’s major trading partners, saw a massive spike to 105.338 to form a new yearly high on Monday, suggesting a flight to the dollar in response to the events of the past few days.

Garlinghouse said, “days like today are never what you hope to see.” But, as someone who has experienced several downturns, he remains adamant that “this too shall pass.”

Days like today are never what you hope to see, esp. in an industry w/ as much incredible talent as crypto. If you recently joined the industry and haven’t seen a downturn like this, know that this too shall pass (advice from someone who’s seen a few downturns over the years).

These are the reasons why Ripple, according to Garlinghouse

Continuing with his thread, Garlinghouse listed several reasons why Ripple has survived previous bear markets. Implying it will also make it through this one.

Top of the list is the experienced executive team, which he states have seen everything from the dot com bust to the 2008 financial crisis to the previous crypto winter.

Next, Ripple is focused on developing products that solve real-world business problems, not speculation. He said Q2’s On Demand Liquidity (ODL) volume had already exceeded expectations before the quarter close.

Ripple’s ODL service is an XRP bridge between two fiat currencies that does away with the need to pre-fund accounts or rely on banks for cross-border payments.

“Ripple has been building enterprise products with long-term utility NOT speculation. These are products that solve problems today, not ones in search of a problem. FYI – Q2 ODL volume (well over $1B) already surpassed its target 3 weeks before EOQ.“

Garlinghouse also mentioned the importance of transparency, saying the firm’s quarterly reports demonstrate a willingness to engage in this practice and communicate what is and isn’t working.

Ending his list on a somber note, Garlinghouse said the current situation “is not a small market gyration.” However, he disclosed that Ripple has been preparing, by stacking cash, to ride out the downturn.

Who will make it on the other side of the bear market?

CoinMarketCap currently lists 19,855 cryptocurrency projects, many of which won’t make it through crypto winter for the reasons listed above.

On that, Garlinghouse expects more pain in the near term. However, he’s confident that the crypto industry will come out the other side to become more integrated with the global financial system.

The market is likely going to shrink in the near term, but I and many others have every ounce of confidence that crypto will succeed in the future as an integral part of our global financial systems. Slow and steady wins the race.