Ripple CEO blasts the SEC on one-year anniversary of lawsuit

Despite the initial damage caused by the lawsuit, Brad Garlinghouse says 2021 was Ripple's strongest year to date. 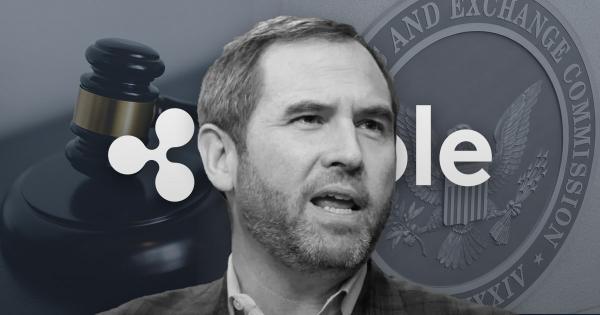 A year ago, on Wednesday, the SEC filed legal action against Ripple on charges of selling unregistered securities.

With that, Ripple CEO Brad Garlinghouse saw it fitting to post a tweetstorm of his thoughts on the matter. Summing up, he reiterated that the lawsuit against his firm was an attack on the whole crypto industry.

“Of all the shitty things in 2020, this was certainly one to cap the year. But what I said then remains (painfully) true today: this is an attack on crypto in the US, not just Ripple. Some took the SEC’s allegations at face value/ thought this was a one off, but no longer.”

Both parties have traded blows during the pre-trial discovery phase. But, based on what has come out so far, the overall public consensus is that the lawsuit has backfired against the securities regulator.

Garlinghouse’s “attack on crypto” comment, first made in a blog post as an immediate response to the SEC lawsuit filing, has been validated to a degree as 2021 unfolded.

The prime example of this is perhaps Coinbase’s attempt to launch its “Lend” staking product. When giving the SEC the heads-up on Lend, CEO Brian Armstrong said he was threatened with legal action and refused an explanation.

In response, SEC Chair Gary Gensler said exchanges, such as Coinbase, should “come in and talk to us.”

Going purely at face value, one might speculate that the SEC wants crypto to fail. Or at least be severely hamstrung to the point it offers no real benefit.

Following Gensler’s appointment as SEC Chair in April, many held hopes that his background in teaching blockchain would translate into a pro-crypto sentiment at the agency.

But during the Ripple boss’ tweetstorm, Gensler was called out for taking an “anti-crypto approach.” Garlinghouse added that a continuation of this would see the U.S fall far behind other nations as Web3 developments pick up the pace.

“Which brings me back to the SEC. As Chair @GaryGensler seeks to expand its remit, he has taken an aggressively anti-crypto approach and companies are already moving outside the US. Web2 was built with many American companies, but Web3 (or whatever we want to call it)? TBD!”

Despite the difficulties since the filing, Garlinghouse was quick to mention that 2021 has been Ripple’s “strongest year” to date.

He said On-Demand Liquidity (ODL) transactions, which accounts for a quarter of volume on RippleNet, are up 25x compared to Q3 2020 before legal action began. And up 130% quarter on quarter.

As well as that, ODL is expanding globally, with new On-Demand corridors opening up in Japan and the UAE. Garlinghouse also spoke of Ripple’s CBDC work with Bhutan and Palau.

Signing off, the Ripple boss ended by calling on crypto users to reach out to their Congressional representatives and make known their grievances on the lack of regulatory clarity.