A whale alert that found that one billion XRP was moved from Ripple’s wallet on August 1 sent hundreds of Twitter users into a frenzy, as many thought it was a nefarious token dump. 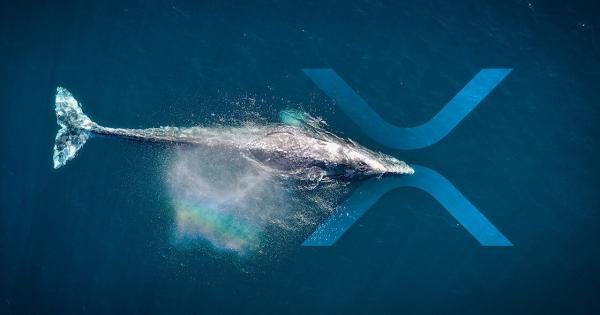 A whale alert that found that one billion XRP was moved from Ripple’s wallet on Aug. 1 sent hundreds of Twitter users into a frenzy, as many thought it was a nefarious token dump. However, the transaction is a monthly escrow release set by Ripple to regulate the upper limit on new XRP in circulation.

A token dump alarm went off on Wednesday afternoon after a whale-watching Twitter profile spotted that 1 billion XRP was unlocked from one of Ripple’s wallets. According to data from Whale Alert, the transaction, worth over $320 million at current market prices, was unlocked just after midnight on Aug 1.

The news about one billion new XRP tokens entering the market wasn’t well-received by the crypto community, with many Twitter users believing it was a classic “pump and dump scheme” conducted by Ripple.

The reactions ranged from outraged to amused, but most were extremely critical of Ripple and its token distribution strategy. Ripple was accused of dumping billions of tokens in the past couple of years to increase profits, while XRP holders were left to deal with huge losses.

Many users said that the token dump would decimate XRP’s already weak price. Some even compared it to the way central banks created inflation by printing money.

However, the anti-Ripple tide of comments was quickly met with resistance from XRP supporters, who explained that these “dumps” were a monthly occurrence.

Everyone blows up when this happens; it is a monthly escrow release. On average, 75-80% of XRP (800 Million) is returned The 80% that is returned, will be placed back into another 55 month escrow. They have a 30 year plan to distribute the supply; this is not a "Pump & Dump".#XRP

To introduce predictability to the XRP supply, Ripple created its escrow account. In a document published in December 2017, Ripple explained that 55 billion XRP, 55 percent of the total possible supply, was locked into a series of escrows. These escrows were placed on Ripple’s own ledger and are controlled by the ledger mechanics.

Every month, a total of 1 billion XRP is released from the escrows to provide an upper limit on the amount of new XRP that can be brought into circulation. The releases were set to go on for 55 months and should expire in mid-2021.

The company specified that all unused XRP would be returned to the escrow account at the end of each month and be distributed in the next release. While most of the escrow tokens are set to be sold, Ripple revealed that a portion of the released funds will be used to support projects that work on improving the XRP ecosystem.

It’s hard to tell how all of the negative press will affect Ripple in the long-term, but it’s clear that XRP suffered some damage from the escrow release. The token lost just under 2.5 percent of its value in 24 hours, data from CoinMarketCap showed.