Following a heated debate at the Asia Blockchain Summit, Doctor Nouriel Roubini ramped up his campaign against BitMEX and its CEO, Arthur Hayes. 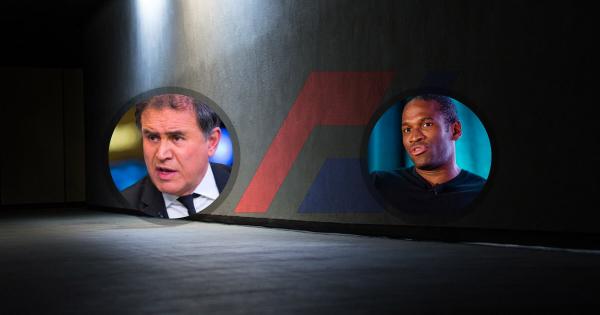 Following a heated debate at the Asia Blockchain Summit, Dr. Nouriel Roubini ramped up his campaign against BitMEX and its CEO, Arthur Hayes. In a recent op-ed piece, Roubini accused Hayes of being involved in “systematic illegal activity” at BitMEX, saying the exchange’s 100-to-one leverage and liquidation profits should be banned.

After a heated debate at the Asia Blockchain Summit in Taipei, the crypto industry’s most vocal critic took another jab at Arthur Hayes. Nouriel Roubini, a professor of economics at the Stern School of Business, published an op-ed piece on Project Syndicate earlier this week, where he accused BitMEX of being involved in shady and illegal activities.

The article, titled “The Great Crypto Heist,” starts as a criticism of the current state of the crypto industry, but quickly turns into a hit-piece targeted at Hayes and his exchange. Roubini said that “some of the biggest crypto players may be openly involved in systematic illegality.” That, he noted, includes BitMEX.

Roubini criticized BitMEX for allowing its traders to take on too much risk. He said that with the exchange’s 100-to-one leverage, even a 1 percent change in the price of the underlying asset could trigger a margin call that would wipe out all investments.

Roubini also accused BitMEX for profiting from its liquidation fund. Citing a 2018 Medium post from an anonymous blogger as a source, he said that, at times, liquidations account for up to half of BitMEX’s revenue.

Skirting AML and KYC regulations, front-running clients on their internal for-profit trading desk, and providing a platform for terrorists from Russia and Iran to launder money are some of the other accusations mentioned in the article.

Hayes was quick to respond to these accusations, telling Bloomberg News that BitMEX rejects any allegations of criminality, manipulation or unfair treatment of their customers.

“BitMEX provides safe, fast, professional and liquid ways for those who see the potential of crypto and to trade and hedge cryptocurrency risk,” he said via a spokeswoman. “We continue to monitor all legal and regulatory developments around the world and will comply with all applicable laws and regulations.”

Last year, Hayes also told Yahoo Finance that the exchange doesn’t make money when its customers are liquidated and never trades against them. BitMEX’s perpetual BTC/USD contract is also not the only product with 100-to-one leverage – even Bitfinex is preparing to launch its own 100x margin derivatives product.

However, BitMEX’s seemingly rock-solid position has been shaken by serious criticism from the crypto community. The exchange secretly managed to secure exclusive rights to the video of the Roubini vs Hayes debate and has refused to release it in full for more than a week. With both Roubini and Hayes claiming to have won and only a few short videos shared, it was impossible to tell how the debate actually went.

Roubini spent several days demanding that the full video of the debate be released. Surprisingly, he gained a huge following among the crypto community, who criticized Hayes for refusing to release the video despite claiming to have won the debate.