TIME will auction three NFTs of magazine covers signaling no slow down to the controversial crypto craze. 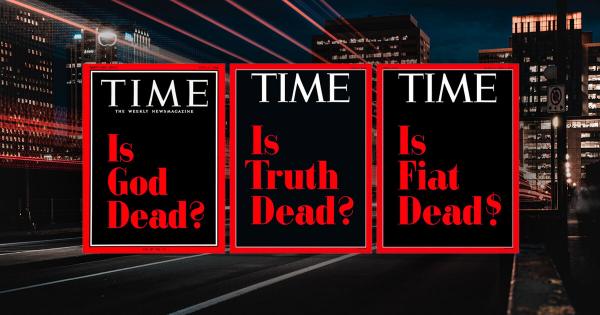 Love them or hate them, NFTs continue their foray into the mainstream undeterred. The latest firm looking for a piece of NFT action is popular bi-weekly news publication TIME.

The TIME NFTs feature two iconic covers and one specifically made for the NFT auction. Consistent with the magazine’s M.O, all three covers provoke thought and controversy in parallel.

The “Is God Dead?” featured on the April 8, 1966, cover – a time when theology carried significantly more weight than today. As expected, maybe even hoped for, it stirred a rousing response from both ends of the belief spectrum.

“The cover inspired countless angry sermons, 3,421 letters from readers and a lively debate at a time when 97% of Americans told pollsters they believed in God.”

In a similar vein, TIME’s April 3, 2017 cover posed the question, “Is Truth Dead?” concerning Donald Trump’s first year of presidency. Trump’s tenure is dubbed the most polarizing in U.S. history.

“Is Fiat Dead?” maintains this theme with satisfying consistency. But this time applied to what is perhaps the most pressing question of these times. TIME Creative Director D.W. Pine commented on the duality it communicates, saying this is comparable to the controversy elicited by NFTs.

“I love the idea that it’s meaning isn’t clear to the casual viewer – much like the crazy, lucrative world of NFTs.”

The TIME NFTs are available to buy via the SuperRare platform. The virtual hammer will fall at 8ET on March 24. At the time of writing, “Is Fiat Dead?” leads the pack with a 20ETH (approximately $36k) bid, with the other two covers currently at 10 ETH a piece.

There’s no such thing as negative press

NFTs have existed for several years, but it wasn’t until recently that the world began to pay attention. The tipping point came after Beeple’s The First 5000 Days sold via Christie’s for an unbelievable $69.3mn earlier this month.

Beeple, AKA Mike Winkelmann, said digital art had been a thing for at least the last two decades. However, there was never a way to own and collect them before NFTs came along.

“With NFTs that has now changed. I believe we are witnessing the beginning of the next chapter in art history, digital art.”

By his admission, and perhaps in response to the staggering price achieved by The First 5000 Days, Winkelmann conceded that NFTs are in a bubble.

“I absolutely think it’s a bubble, to be quite honest. I go back to the analogy of the beginning of the internet. There was a bubble. And the bubble burst.”

The problem is, no-one knows when the bubble will pop. Considering the continuing general uptrend in NFT volume, NFT mania could still be here for some time yet.