Kwon’s arrest warrant is valid for one year and prosecutors are willing to try different tactics to bring to book. 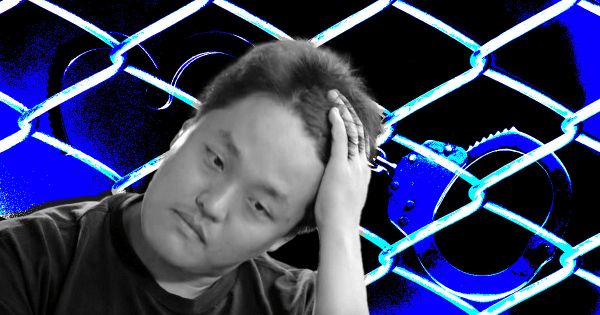 Terra’s LUNA declined 20% on the news that South Korea has issued an arrest warrant for its founder Do Kwon.

The token, which has enjoyed a new wave of interest that pushed its price up by over 80% in the last seven days, has seen its value drop by 21.4% in the previous 24 hours to $3.35, according to CryptoSlate data.

Bloomberg News reported that a court in Seoul had issued a warrant for Kwon’s arrest and that of five others.

Local media Yonhap News said the arrest warrants were also issued for the founding members of Terraform Labs, Nicholas Platias, and the CEO of the affiliated Tchai Corporation, Han Mo.

The arrest warrant is valid for one year. The prosecutors are willing to try tactics like invalidating Kwon’s passport and collaborating with Interpol to bring him in.

Do Kwon presently lives in Singapore.

Since Terra’s implosion in May, several crypto community stakeholders have questioned why the authorities were yet to arrest Do Kwon for his role in the crash.

Kwon has repeatedly maintained his innocence though he admitted that he might have made some mistakes. He also claimed that the prosecutors had yet to reach out to him.

In August, Kwon submitted an attorney appointment letter to prosecutors in South Korea in preparation for his defense.

The crypto community has welcomed news of the arrest warrant, expressing much happiness about the development.

“I don’t think it’s a surprise that he’s being officially accused of a crime. It’s a surprise an arrest warrant didn’t happen sooner.”

FatMan Terra described the news as a “great day for Justice.”

Do Kwon, the man who brought so much horror and suffering to thousands of people across the world for his own enrichment, is now officially a wanted fugitive.

A great day for justice. And there are still a few more shoes left to drop. May the best man win.

This is incredibly bullish.

Arrest warrant out for Do Kwon w/ a Interpol red notice but I always said the bull market would not begin until he is behind bars. pic.twitter.com/MS6N9jzZzv

Do Kwon destroyed more lives with $LUNA and $LUNC than Bitboy, The Moon Carl, MMcrypto, Ian Balina combined and multiplied by 100

Hopefully he serves a long sentence.