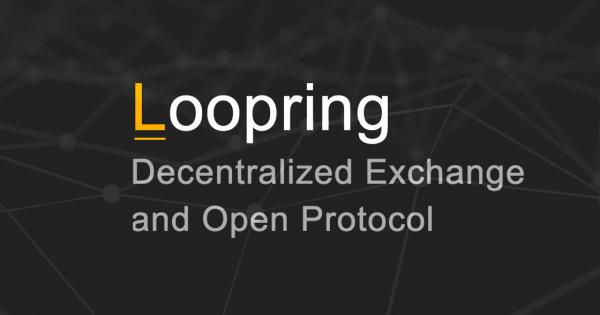 Blockchain technology may be decentralizing the world, but there is one element of the distributed ledger technology ecosystem that is in dire need of urgent decentralization — cryptocurrency exchanges.

All major crypto exchanges currently active in the cryptocurrency sector rely on vulnerable centralized architecture, leaving them open to regulatory crackdowns, hacking attacks, and fraud. Fortunately, decentralized exchange technology is now maturing, providing traders with a method of exchange that is true to the core axioms of the blockchain revolution.

Loopring is a unique project in the world of decentralized exchanges. Rather than create a single decentralized exchange solution, the Loopring team is working towards the development of a system that can be used across all exchanges to minimize risk, enhance liquidity, and create a network that ensures the best prices for all traders.

The Loopring project has captured a significant amount of attention since launch in August last year, trading up to an all-time high market cap of $1.2 billion at the beginning of 2018 and forging significant partnerships.

Interestingly, the Loopring project has operated with virtually nonexistent marketing but has benefited from consistent community engagement and a strong development team.

The Loopring project is attempting to solve an ongoing issue in the cryptocurrency trading ecosystem — exchange centralization. The Loopring white paper succinctly presents these issues, highlighting the lack of securely centralized exchanges expose traders to, the opaque manner in which centralized exchanges manage user capital, and the lack of liquidity presented by the fragmented state of the current exchange ecosystem.

A decentralized exchange allows users to retain control over their private keys and leverage the trustless nature of decentralized ledger technology to eliminate security flaws.

Current decentralized exchange solutions, however, suffer from a lack of consistent interoperability standards that restrict liquidity and are limited by the transaction capacity of the underlying blockchain upon which they are built.

It should be noted that Loopring is not a decentralized exchange itself.

Instead, Loopring is essentially a disassembled set of components that work in concert to perform all of the functions of an exchange in a decentralized environment. Loopring is primarily a back-end process that runs behind an exchange — the Loopring team state explicitly that the Loopring project is not intended to compete with other exchanges, but is instead designed to enhance them.

The Loopring project is built on top of the Ethereum blockchain,. The Loopring team, however, plans to develop support for other blockchains such as NEO, Qtum, and EOS, with the end goal of delivering functionality across all blockchains.

Put simply, the Loopring project is aiming to create a modular protocol that can be used to accelerate the exchange decentralization process. Loopring’s solution helps to eliminate counterparty risk, improves liquidity through an innovative order pooling mechanism, and reduces dependence on centralized third parties.

Loopring is the brainchild of Daniel Wang, the co-founder, and CEO of Coinport Exchange. The Loopring project is inspired by distributed app blockchain project NEO, with Wang stating that NEO founder Da HongFei inspired the project.

Loopring is working in a unique space in the blockchain sector with the development of a decentralized exchange protocol but is remarkably similar in composition to the 0x project. Both projects boast a similar market cap and charts, and both use an open smart contract system to facilitate trades.

The Loopring ecosystem consists of many different elements that work together to deliver full exchange functionality. The first element of the Loopring system is a wallet service, which provides users with access to their tokens and allows them to execute orders on the Loopring network. 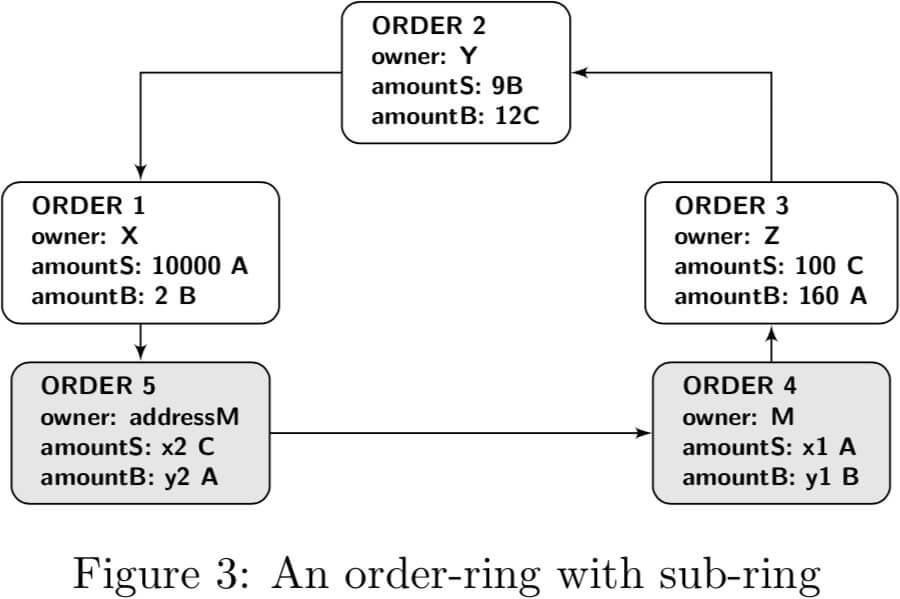 Nodes within the Loopring network are provided with a flexible array of ways to participate in network maintenance.

The Loopring integrates a relay-mesh network to facilitate order and liquidity sharing. Nodes running Loopring relay software join an existing network and can share liquidity with other relays over the blockchain.

Loopring Nodes are also able to operate as “ring miners,” which receive orders from wallets or the relay-mesh. These ring miners maintain trade history and order books, computing the most efficient method to fulfill received orders, a computationally intense process that is conducted off-chain. Ring miners are responsible for order matching, attempting to fill orders fully or partially at the given exchange rate or better.

The ring mining element of Loopring’s architecture is unique in that it provides ring miners with the option to capitalize on any margin created when executed rates are better than rates specified within an order. Ring miners can choose between either claiming a portion of the margin generated or keeping transaction fees in the form of Loopring’s native LRx token. 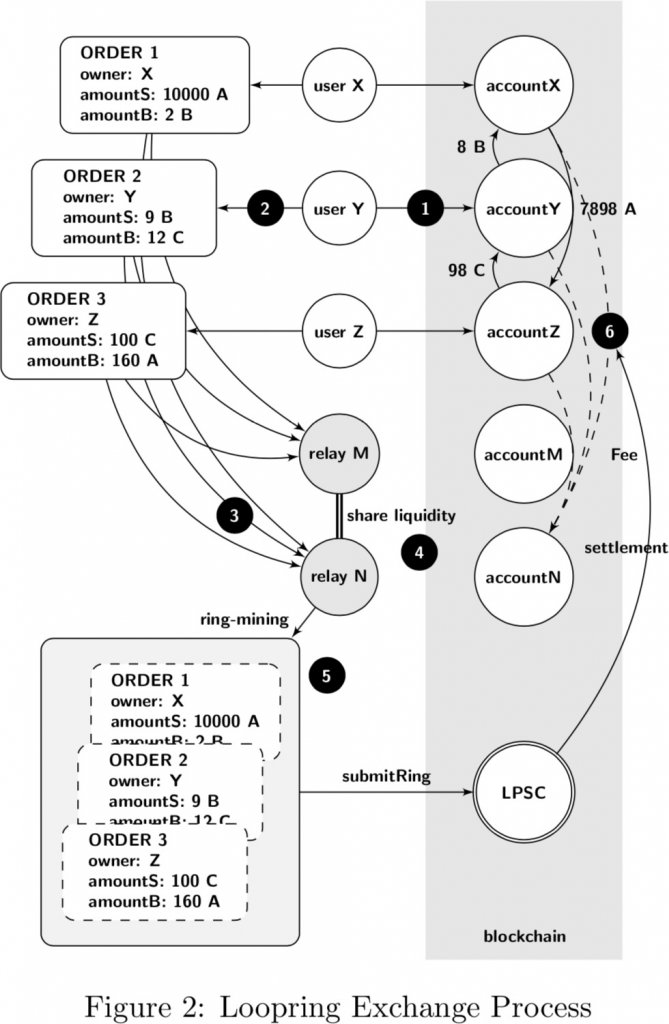 The Loopring ecosystem is managed by Loopring Protocol Smart Contracts, which are publicly auditable. These smart contracts oversee ring miners and manage all token transfers, event emittance, and ring miner incentivization in a trustless manner.

Lastly, Asset Tokenization Services provide network participants with the ability to trade assets that cannot be directly traded on the Loopring network. These services are centralized in nature, and are run by “trustworthy companies or organizations.”

According to the Loopring white paper, this element of the Loopring protocol allows users to deposit assets in return for tokens that can be traded on the Loopring network, enabling the emulation of cross-chain trading.

The Loopring white paper, however, does not fully explain the manner in which assets deposited with Loopring Asset Tokenization Services will be managed.

Loopring, like Syscoin or Chainlink, is a blockchain project that eschews substantial investment in marketing and promotional endeavors in favor of a strong development team and community engagement.

The Loopring team is also extremely active on Twitter and boasts a Telegram group with roughly 1,800 active members.

The Loopring team is led by founder Daniel Wang, a former Google tech lead and

Loopring is supported by many strong partnerships that lend gravitas to the project. Loopring is partnered with Jibrel Network, who will leverage the Loopring solution to minimize counterparty risk, and is collaborating directly with Blockchain at Berkeley.

Notably, Loopring has forged a strategic partnership with YBF Ventures and the State Government of Victoria to facilitate the impending shift to Web 3.0. Loopring also benefits from an alliance with several wallet platforms, including Morpheus and Q3, a highly popular NEO wallet.

Loopring has expressed a volatile chart pattern since launching at $0.055 on Binance in September 2017, experiencing relatively slow growth bringing it to a stable value of around $0.26 until a massive spike — likely due to an artificial pump — caused the token value to skyrocket to $2.22 within the first two weeks of 2018. 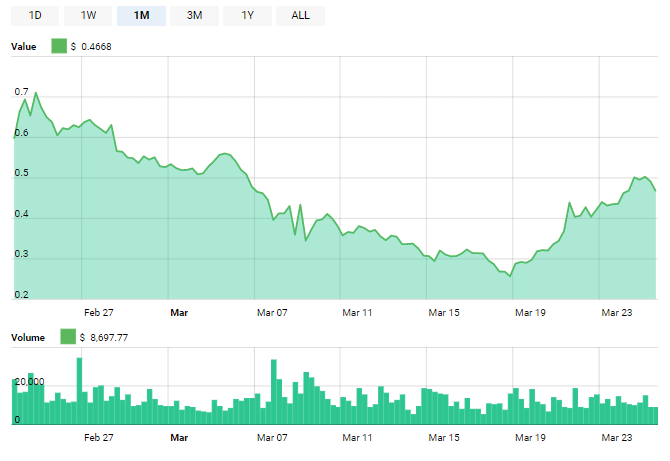 An ensuing dip and bounce saw Loopring’s LRC token stabilize at the $0.50 level until a drop in market confidence across the board saw LRC drop to $0.28 over a steady decline from mid-February until late March. LRx has recently begun a positive climb, recapturing lost ground and stabilizing at the $0.45 level.

How to Buy Loopring

Loopring is currently trading on 22 different exchanges, 30% of all volume traded via the LRC/BTC pair on Binance. Other significant markets include OKEx, Bittrex, Gate.io, and Upbit.

Loopring is an exciting approach to the issue of exchange centralization that incorporates a dynamic, modular architecture to solve the problems of liquidity and blockchain network capacity. The close similarity between Loopring and the 0x project, however, means that only one of these solutions will emerge as the victor between the two.

Loopring’s innovative off-chain ring mining architecture, however, places it in a strong position to rapidly accelerate the proliferation of decentralized exchanges in future.