Is Bitcoin in for a short squeeze? 4 bullish trends to look out for Laszlo Dobos · 7 months ago · 3 min read
News › Edge › Bitcoin › Analysis

Is Bitcoin in for a short squeeze? 4 bullish trends to look out for

Since all-time-high in November 2021, things has been looking gloomy in the cryptocurrency market with bitcoin falling almost 50%. But there are clear trends suggesting a shift is on the horizon. 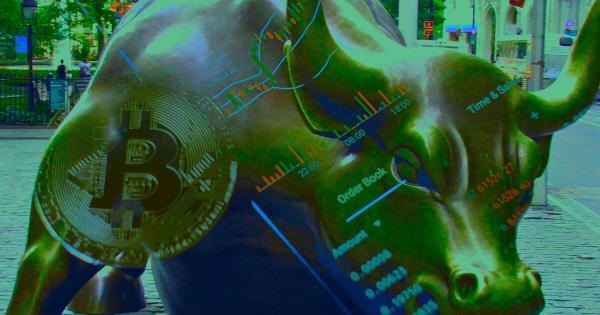 Bitcoin is now into its 12th week of the prevailing drawdown since the all-time-high, and derivatives traders are betting on more downwards movements by the premiere cryptocurrency. Meanwhile, on-chain demand models suggest a more bullish undertone is in play, according to on-chain analysts Glassnode.

“As a percentage of the Bitcoin market cap, open interest in perpetual swaps is hovering around 1.3%, which is historically high, and often as precursor to a deleveraging event,” Glassnodes writes in this week’s newsletter.

At the same time, funding rates have traded negative for much of January, Which may indicate a short bias in perpetual swap markets. A similar negative trend can be seen in options markets, with a multi-month high put/call ratio of 59%; an indication that traders have shifted towards buying downside insurance.

“With this observable shift from long into short bias across derivatives markets, the dominance of futures liquidations has started to creep towards the short side. With high negativity, elevated leverage, and an overall short bias, a reasonable argument could be made for a potential counter-trend short squeeze in the near-term,” the newsletter reads.

Looking at the demand side of the market, the number of non-zero Bitcoin wallet balances is on the rise. The current trend of non-zero wallet counts appears to be largely unaffected by the last three months of depressed prices, with wallet count hitting a new all-time-high of 40.16 million addresses.

Retail wallets unfazed by this correction

Though bitcoin market price has been on a decline for the past weeks, retail size wallets, wallets holding less than one BTC, appear unfazed by this correction, with supply held in these wallets continuing to climb. Given Bitcoin’s history as a grassroots phenomena, this speaks to a growing class of “sat stackers” who remain throughout all market conditions.

Another trend on the positive side is that funds are moving towards illiquid wallets. Over 0.27% of the supply, about 51,000 BTC, was moved from a liquid to an illiquid state, according to Glassnode.

“This week, we have seen net outflows of a reasonably high magnitude, with rates between 45,000 and 59,000 BTC per month. This has confluence with the increase in illiquid supply, indicating that some portion of the exchange withdrawn coins may have moved to colder storage.”

“Despite equivalent scale drawdowns, the trends in exchange reserves and coin liquidity are trending in opposite directions. The current environment has a markedly more bullish undertone of supply absorption, and far fewer coins being spent and sold in fear,” the newsletter reads.

Adding to the above bullish signs, during both of the May-July and the current drawdowns, settlement volumes declined significantly from the foregoing peaks. However, the floor value has continued to grow, even during bearish trends. This speaks to a more sustained, and even growing utility of Bitcoin.

Also, these settlement volumes move away from retail-sized transactions (less than $100,000), towards high-net-worth and institutional-sized values (over $1 million).

“Transactions over $10 million in size now dominate 45% of settled volume, whilst sizes over $1 million dominate over 70% on an entity-adjusted basis. Large size transactions have sustained this elevated dominance throughout 2021, and have actually peaked higher over the course of this correction.”

Previous instances where settlement volumes have been this high relative to the market cap have preceded strong bullish impulses in bear markets, or at macro market bottoms such as December 2018, and March 2020.