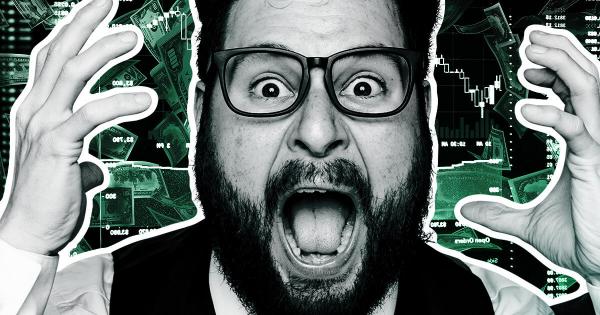 On May 22, CryptoSlate received numerous reports from Investors that Woo Exchange had reversed dozens of trades and thus deleting profits from users’ accounts.

The incidents allegedly took place around May 16 during the UST de-peg event that had an enormous correlated effect on the price of LUNA. Traders within the group claim to have had up to $300,000 in profits removed from their accounts, with some being left with negative balances after removing LUNA tokens from the exchange.

The allegations came from several investors who had provided screenshots of their accounts before and after the event as proof that the exchange removed their profits. The below chart, made by one of the investors, shows the price of LUNA across a several-day period with six wicks down below 0.00001.

The commentary on the chart, also added by an investor, states that they do not believe the downward price spikes were glitches but rather a “huge whale was dumping their position, which caused the price to fluctuate.” 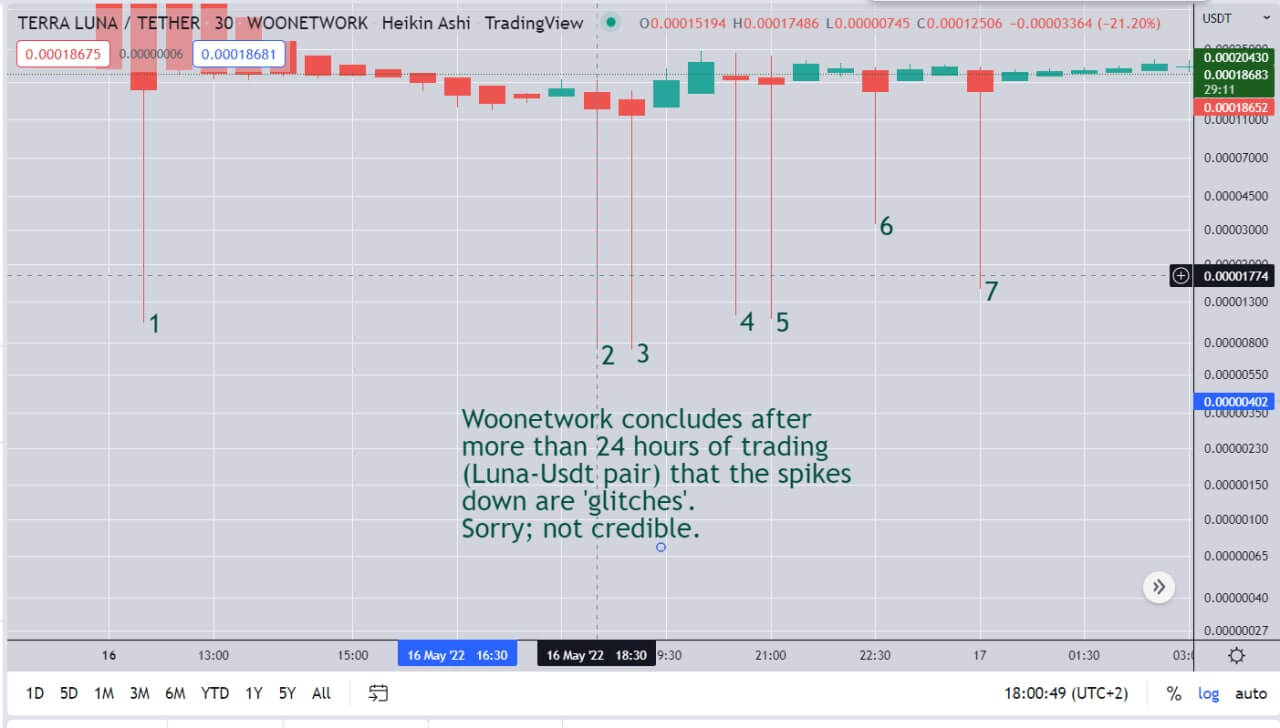 We reached out to Woo X directly and received the following reply from Ben Yorke, VP of Marketing,

“The WOO X order book encountered an error at around 10:30 UTC, about thirty minutes after trading had resumed on LUNA/USDT. The glitch resulted in a dislocation, with the token being traded at up to 90% less than the market price on other venues.

In events like this, WOO X always seeks to protect the interests of users by ensuring that system-related errors will not result in erroneous losses. The rollback is a common response in both CeFi and traditional finance, protecting users who bought or sold at dislocated prices.

After a user noticed the glitch and posted it on social media, a small group of users took advantage of the price dislocation. They executed thousands of transactions outside the normal market range in a short time frame resulting in unexpected gains and losses.

WOO X opened a full investigation, and communicated personally with affected users. At the conclusion, the users were awarded with a 10% bug bounty.

As a result, no user experienced any financial loss as a result of the dislocation. WOO X has since resolved the issue that caused the dislocation and implemented more safeguards to ensure that future incidents can be minimized.

Woo X claims that a glitch was responsible for the downward price action causing the price to show “up to 90% less than the market price on other venues.” However, the TradingView chart below indicates that LUNA/BUSD traded as low as 0.00000018 on May 13, indicating an extremely volatile market.

Except for the few downward wicks, the price never reached anywhere near this price on Woo X. Question can be raised as to why the price of LUNA on Woo X never reached the lows shown on Binance.

We reached out to the investors via Telegram and have spoken to many of them directly over the past 48 hours. Upon reading Yorke’s response, one investor commented,

“Woo’s story is wrong… The chart shows that the first spikes down started as early as the morning of May 16. After that many more spikes followed (in the evening of May 16).

They (Woo) are now pretending that they have acted very firmly. Something that Crypto.Com did, by the way, and then apologized. If indeed there was a glitch. Then why did they let traders trade for two days before they stopped trading the pair Luna-USDT.”

A similar event did indeed occur on crypto.com shortly after LUNA was relisted. Kris Marszalek, CEO of Crypto.com, took a different approach stating,

We will also honor all Luna transactions from yesterday, including those with price glitch ie. there will be no reversals.

Our team is working on the credits for users and it should be done within the hour.

Thank you for your patience as we work through it 🙏 https://t.co/vBpYNoWhiJ

In reply to a question comparing the Woo X response to that of Crypto.com, Yorke stated,

“Not familiar with the size and the scope of incidents on other exchanges, but seems like others may have made an ad hoc decision to limit negative PR.

At WOO X, we prioritize consistency and fairness with price execution, and as a result, users don’t have to worry about the system executing erroneously and causing them losses.”

There seems to be little explanation for why these downward wicks should be considered erroneous and how it is possible to maintain consistent prices during a black swan event such as the UST de-peg. Many exchanges suffered issues around liquidity and halted trading during the event.

Woo X allowed users to trade on their platform and then apparently reversed trades that allegedly did not suit them. Woo X offered all traders who profited from said transactions a 10% bug bounty fee in response to the incident. Some accepted this, while others believe they are due their funds in full. Regarding the bug bounty, one investor told us,

“the measures taken by Woo are not normal in CEFI and traditional finance, because they have taken 90 percent of the profits from the users who trusted them under the name we protect our users.

This is hypocritical. The users who traded on these opportunities were not aware of any harm. They traded lawfully.”

Further, another investor claims they have, in fact, incurred considerable losses from this event while refuting that they jumped on a Twitter trading tip,

“I was trading, saw the dips happening right in front of my eyes, decided to put a liw order in and started trading.

Made quite some money, and before I went to bed i sent 75% of that to my bank and bought woo coins with the 25% left.

When i woke up, account was locked. And after a day everything was turned back.. leaving me in a big fat minus on the exchange balance.

As i already spent quite some of that money to debts due to 2 years of corona, i asked support how long i can be in minus.”

The group, who seem very knowledgable in their understanding of trading, also brought to our attention a case against Quoine, which they believe sets a precedent for their case.

One of the members commented, “I can see why crypto.com’s CEO Kris has abandoned his reversal plan. He has apparently taken good legal advice and happily reversed. Hopefully, Woo will reverse their actions by following crypto.com in their strategy.”