Even at a rock bottom BTC price Schiff maintains gold is the asset to hold. 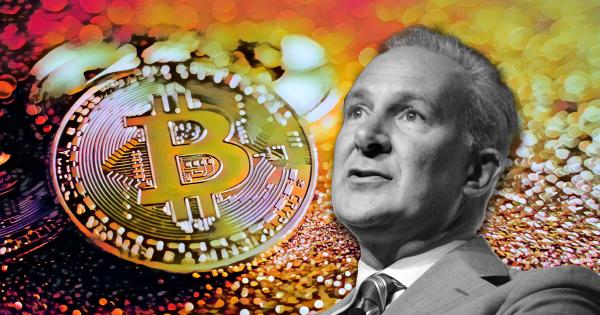 Gold bug Peter Schiff is known for his hatred of Bitcoin. But in a recent interview with Anthony Pompliano, he divulges what it would take for him to buy into the leading cryptocurrency.

As much as the crypto community dumps on Schiff, his views on Modern Monetary Theory (MMT) have a ring of common sense about them. And that’s something he shares with many crypto advocates.

The primary tenet of MMT asserts that governments can and should print as much money as they want because they cannot become insolvent. In other words, governments can extend the public debt to infinity.

With everything that has happened over the past 18 months or so, this is a policy that many governments have adopted, particularly the U.S government. But Schiff has warned that continuing down this path will exacerbate economic imbalances leading to an economic collapse.

He adds that history shows money printing will only lead to inflation, which he calls a tax onto itself.

“We’ve had plenty of examples in history where currencies have been destroyed based on what they now call Modern Monetary Theory. The whole idea that you could print all this money and not have inflation…printing money is inflation, so by definition, you’re creating inflation.”

But when it comes to protecting oneself from this, here’s where Bitcoin advocates and Schiff differ greatly. Schiff opposes Bitcoin because he thinks it’s an unreliable store of wealth and also lacks inherent value.

“Money needs to be a commodity. It needs to have actual value unto itself, not just the uses and means of exchange.”

He’s waiting for the Bitcoin dip

This is a view he maintains across all cryptocurrencies, not just Bitcoin. But, in his mind, there is an exception to this rule – gold-backed cryptocurrency.

“But, if you have a digital currency that’s backed by gold and redeemable in gold, well then that’s fine, that’s great, I think that would work perfectly.”

When quizzed on what it would take for him to buy Bitcoin, Schiff said, at current prices, he wouldn’t want to waste his money.

Schiff added that if the price of Bitcoin fell sufficiently, to less than $1, he might take the plunge and finally buy BTC.

“I mean, I suppose if the price got cheap enough, maybe if it got back below a buck, maybe I could buy one, I don’t know.”

But ending speculation on whether he’s a convert, at $1, he said he’s not interested even at that price. His reason? Unlike gold, Bitcoin is not a commodity.