FTT's value is at the risk of a drastic sell-off, considering that around 60% of its supply is currently on exchanges. 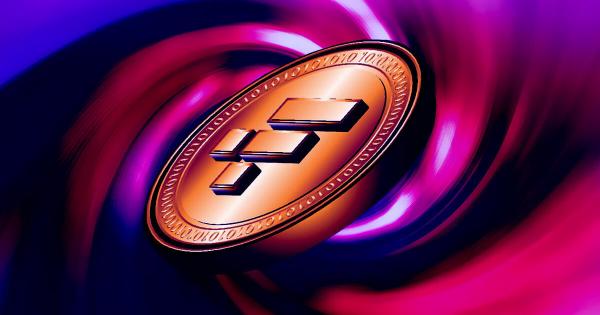 Glassnode data, as analyzed by CryptoSlate, shows that around 50 million FTX’s FTT tokens have been dumped on exchanges following Changpeng Zhao’s announcement that Binance would liquidate its FTT position over the coming months.

Around 23 million FTT tokens ($584.8 million) were transferred to Binance on Nov. 6. CZ confirmed that these tokens were part of its holdings that it was looking to liquidate.

Lookonchain further revealed that a whale address transferred 491,534 FTT tokens ($10.9 million) to Binance at a loss. According to the on-chain sleuth, the whale bought the tokens on August 5 for $29.9 but would be selling at a loss, considering the tokens were trading around $23 as of press time.

FTT’s value is at the risk of a drastic sell-off, considering that around 60% of its supply is currently on exchanges.

A trading analyst  Ali Ajouz had identified $16.5 as a support level for FTT in case there was a dump. Ajouz based his prediction on historical data, suggesting that the weighted probability value of the coin is between $22 and $24.

#FTT #FTTUSDT $FTT
worst case scenario based on the historical data:
The weighted probability suggests a fair price between $22 and $24. A loss of the resistance would take us to the 40th percentile of $20.2 as a support point. In case of a dump, we have $16.5 as a support. pic.twitter.com/Y6hI14T290

However, if the coin were to lose its resistance, it could drop to $20.2 or lower.

This view was corroborated by Alistair Milne, the CIO of Altana Digital Currency Fund, who said the token could drop to as low as $5.

… because if this support breaks, its going to $5 pic.twitter.com/lTvSJJDdpB

According to him, Alameda wouldn’t have made a public offer of $22 if they wanted the token; instead, the offer was to prevent the “price crashing through support, not about getting $FTT as cheap as possible.”

But one analyst believes that FTT will recover, saying they are long on its position. If FTT should lose too much value, it could affect the over $2.2 billion loans that Alameda Research obtained using FTT as collateral.

Meanwhile, the Arkham Intelligence dashboard shows that 90% of FTX’s $6.3 billion treasury is in its native token, FTT.

According to the dashboard, the exchange holds 245 million FTT tokens worth $5.52 billion. FTX’s other crypto holdings include $68.27 million of Staked Ethereum, $37 million of Chainlink, $60.16 million of Pax Gold, etc. –the reserve does not include the firm’s Bitcoin holdings.

Its sister company, Alameda research, has a treasury reserve of $165 million. For context, Binance’s treasury is over $43 billion.

Binance has continued to consolidate its top position in the crypto space during the bear market. Its stablecoin BUSD supply has hit an all-time high on exchanges, according to the Glassnode data analyzed by CryptoSlate.

BUSD has enjoyed increased adoption and growth after Binance revealed that it was converting it was removing USD Coin (USDC), TrueUSD (TUSD), and Paxos Standard (USDP) as tradeable assets on its platform.

The exchange continued that it would convert its users’ balance in these stablecoins to BUSD. Since then, the stablecoin market cap has grown from under $20 billion to an all-time high of $22.55 billion.