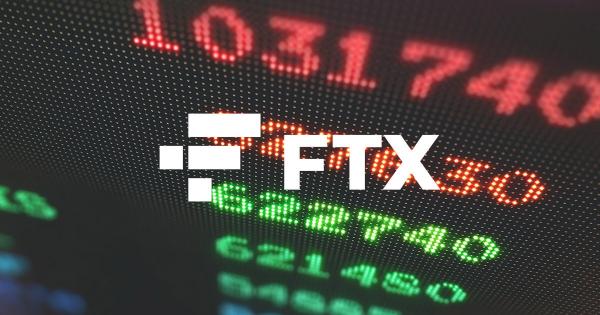 FTX’s native token FTT has experienced a volatile weekend as Binance began liquidating its tokens due to “recent revelations that have came [sic] to light,” according to Binance CEO CZ. The FTT token is down 9.4% on the day as of press time.

The local bottom for Nov. 6, however, was as low as $12.42, down 15% since Saturday, Nov. 5. FTX uses the FTT as collateral for several loans leading to fears of another major crypto meltdown should FTX receive a large margin call.

As part of Binance’s exit from FTX equity last year, Binance received roughly $2.1 billion USD equivalent in cash (BUSD and FTT). Due to recent revelations that have came to light, we have decided to liquidate any remaining FTT on our books. 1/4

Rumors of CZ’s involvement started early on Sunday, Nov. 6, as FTX’s native token, FTT, fell sharply. There are fears that the downturn could trigger liquidations for FTX, resulting in a Terra Luna-style “death spiral.”

Looks like CZ is slowly dumping $500M worth of FTT on the market, if he continues many of Alameda's FTT backed loans will be liquidated causing a death spiral.
Let the party begin! pic.twitter.com/lKJ1zwr17S

A large portion of FTX’s crypto assets is allegedly tied to the FTT token to the tune of $5.8 billion. Therefore, a drop in price of 15% would have reduced FTX’s holdings by around $2.1 billion before the token began to recover.

The FTT tokens held by Binance are assets received as part of its exit from an early investment in FTX. While the news may appear bearish for FTT, CZ has stated that he intends to liquidate the tokens in a manner that “minimizes market impact.”

CZ also denied that the move was an act of aggression against a competitor, clarifying that ” every time a project publicly fails it hurts every user and every platform.”

Rumors are also doing the rounds of insolvency issues for Alameda Research, the company behind FTX CEO Sam Bankman-Fried’s empire. A substack article published on Nov. 4 stated that the “FTT Token Is Another Stupid Flywheel” similar to Celsius’s CEL token.

The similarities between the two tokens are laid out in the report, as well as on-chain data revealing that “FTT ownership is highly concentrated, with 93% of the total tokens held by only 10 addresses.”

The volatility was outlined by CryptoCred, who gave a play-by-play of the weekend revelations around the FTT token’s price action.

FTT bounces again on Caroline saying they’ll buy it all

SBF retweeted a post by Caroline Ellison, the current CEO of Alameda Research, as she attempted to carry out damage control around the speculation. Ellison asserted that the group of companies has over $10 billion in assets that have not been included in recent leaked numbers.

A few notes on the balance sheet info that has been circulating recently:
– that specific balance sheet is for a subset of our corporate entities, we have > $10b of assets that aren’t reflected there

Besides the retweet, SBF is publicly unworried about the volatility, as his only other posts on Nov. 6 focused on FTX features instead of insolvency fears.

Ellison directly replied to CZ on Twitter, stating that Alameda would be happy to “buy it all from you today at $22” to minimize the market impact, as the Binance CEO asserted was his goal.

@cz_binance if you're looking to minimize the market impact on your FTT sales, Alameda will happily buy it all from you today at $22!

Regardless, the crypto community has been laser-focused on the issue throughout Nov. 6 as Bitcoin Maxi of Swan Bitcoin questioned whether SBF has “$580M lying around” to buy back the tokens.

It's real. Binance dumping half a billion of FTT.

Does Scam Bankster-Fraud have $580M lying around? Maybe he can jack up yields to attract more retail deposits on FTX Earn. That seemed to work well for Celsius 🤦‍♂️ https://t.co/Pjqk7SC1WN

This is an ongoing story; the article will be updated as more information becomes available.

Update 6 pm Nov. 6: SBF has done little to quell the fears by arguably trolling CZ and the crypto community with a continued focus on new FTX features. Talking about a “SEND” feature that allows users to send crypto to email addresses and phone numbers, he showed an available USD balance of just $6,311, prompting users to joke that this is FTX’s reserve balance.

1) Posting about what everything wants to know more about:

Update 8 pm Nov. 6: CZ confirmed that a transaction from an unknown wallet to Binance for 30 million FTT tokens worth roughly $584.8 million is “a part of” the liquidation of FTT tokens by Binance.

Yes, this is part of it. https://t.co/TnMSqRTutr