The founder and CEO of Tron, Justin Sun, saw his account on social media platform Weibo shut down. While the Chinese version of Twitter offered no explanation as to why his account and the account of Binance co-founder Yi He were removed, Sun assured the crypto community that he had a “direct channel” to Weibo and that the issue will get resolved soon.

Weibo shut down the accounts of two prominent crypto figures—the founder and CEO of Tron, Justin Sun, and Yi He, one of the founders of crypto exchange Binance.

Dovey Wan, the founder of venture capital firm Primitive Ventures and a regular source for crypto-related news from China, revealed the information on Twitter. However, Wan noted that the removal of Sun’s profile was not surprising, as the Tron founder was notoriously outspoken on the platform. 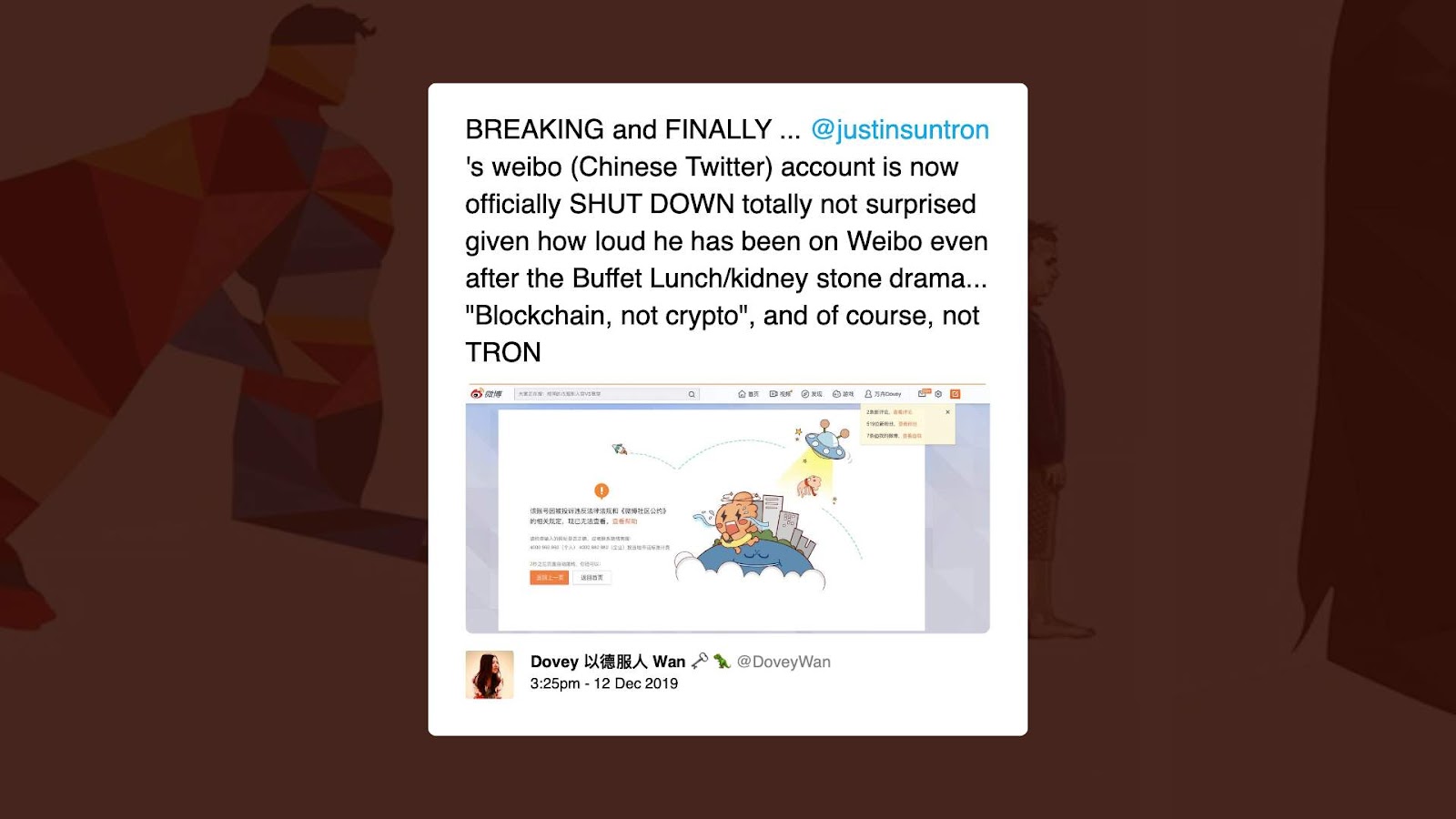 The co-founder and CMO of cryptocurrency exchange Binance, Yi He, was also inexplicably removed from the platform. According to screengrabs from both of their profiles, the accounts have been blocked “due to violations of laws and regulations, as well as the relevant provisions of the Weibo Community Convention.”

No other major names in the Chinese crypto industry had their accounts blocks, with Binance CEO Changpeng Zhao, Huobi CEO Leon Li, and OKCoin founder Star Xu all remaining on the platform.

The outspoken founder of Tron quickly reacted to the news about his profile getting removed from Weibo. In a reply to Wan, Sun assured his followers that this posed no danger to Tron or its native cryptocurrency TRX. He also added that the company has established a “direct channel” to Weibo and is working on getting the issue resolved as soon as possible. 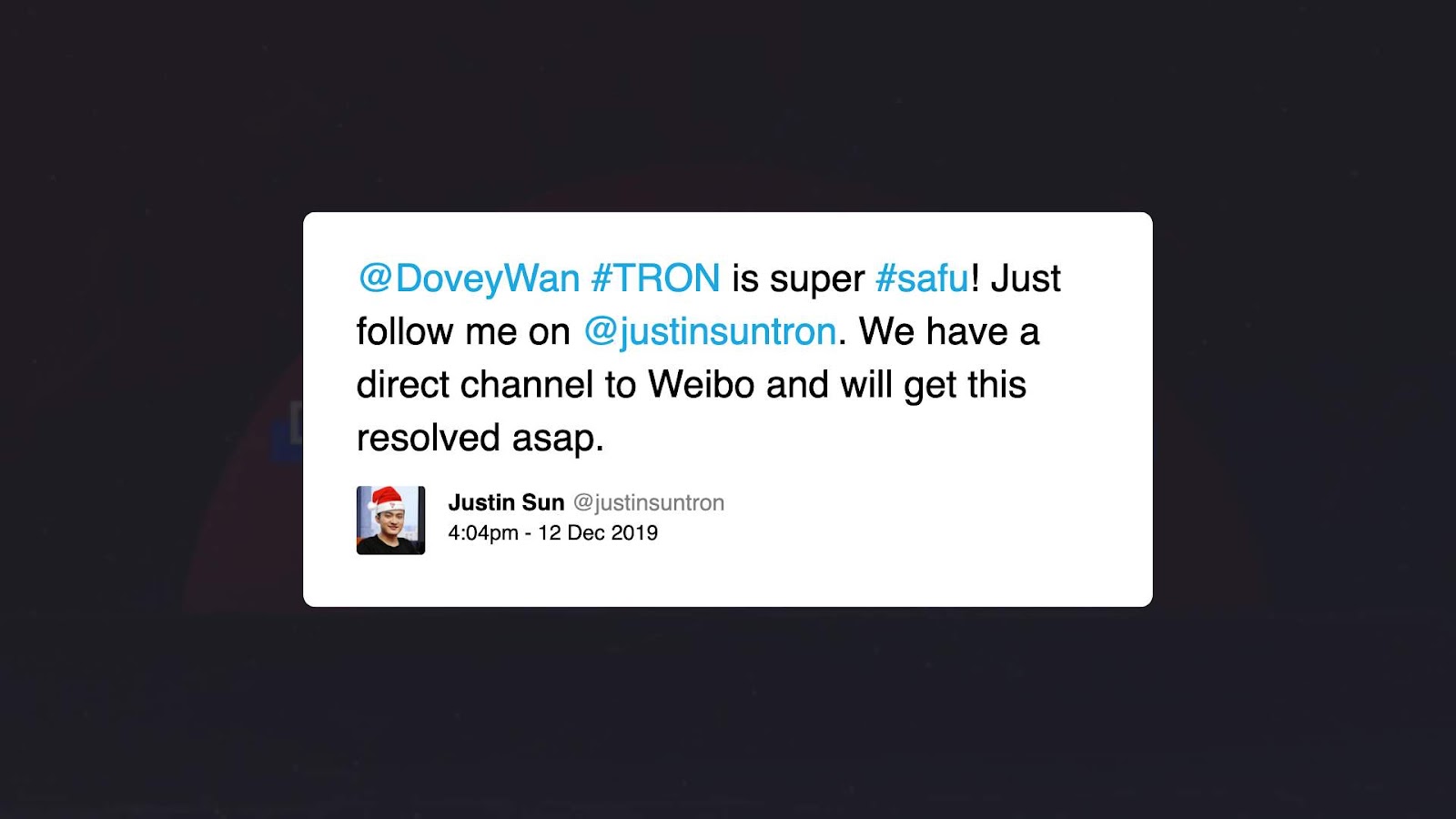 The news about Sun’s removal from Weibo affected Tron’s price. According to data from CryptoSlate, the coin tanked 7 percent when the news broke, dropping from $0.014 to $0.013 in minutes. At press time, TRX seems upward bound and gearing up for a full recovery.

Weibo’s latest account purge is in line with the crypto crackdown that has been going on in China for the past few months. Earlier in November, the official accounts of Binance and Tron were suspended on Weibo as China’s financial watchdogs clamped down on companies involved in crypto trading.

The Chinese government has focused on pushing blockchain development in the country. The effort, spearheaded by the country’s president Xi Jinping, was supported by the People’s Bank of China, which aims to introduce better regulations to the blockchain and fintech industries.

He Yi’s weibo already back up pic.twitter.com/IfvhYnvwqx

Almost 200 cryptocurrency exchanges and token issuing platforms have been shut down.

Search volumes for “Bitcoin” on China’s social media platforms have spiked sharply following the Chinese government’s announcement of an openly bullish stance on blockchain and its various applications, including digital finance.