Ex-Goldman Sachs CEO: Is this is the ‘moment’ for crypto? Liam 'Akiba' Wright · 4 months ago · 2 min read
Bitcoin › People

Ex-Goldman Sachs CEO: Is this is the ‘moment’ for crypto?

Blankfein expected crypto to be having a bigger moment amid global payment freezes. It then went up 10%. 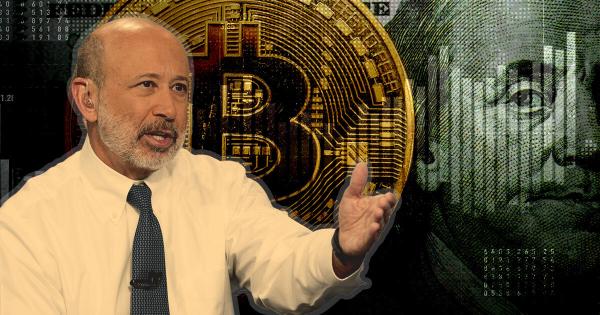 This week ex-Goldman Sachs CEO Lloyd Blankfein asked, “wouldn’t you think crypto would be having a moment now? Not seeing it in the price, so far.” Blankfein appears to have taken a step back from his January U-turn on crypto, where he claimed his views were evolving.

Stating that he is keeping an open mind about crypto, he questions why crypto is not surging as the world reminds us how centralized our finance system is. CryptoSlate recently wrote about how the war in Ukraine highlights the power a handful of businesses and governments have over the world. Further, CryptoSlate also reported how gold had outperformed Bitcoin as a risk-off asset during these uncertain times.

It almost seems like a meme, but the answer can often be found by listening to the age-old advice to ‘zoom out’.Bitcoin is up almost 500% since January 2020. The answer to the question is having a moment is that yes, and it’s been having one for years. Usually, only critics or day traders focus on day-to-day fluctuations in crypto prices.

The situation in Ukraine highlighted some of the major failings of centralized banking. However, because Bitcoin has not rocketed up another 500% since Russia invaded, it does not mean that it is not ‘having a moment.’

Michael Saylor replied to Blankfein within hours, stating the tension between traders and investors lies. Traders treat Bitcoin as a risk-on asset whilst investors see it as the ultimate risk-off asset. Ex-Coinbase President Assiff Hirji also joined the debate to agree that crypto “correlates with the general risk-on/off mentality. That will and is changing as usage increases”.

There is a tension between conventional traders that see #bitcoin as something to buy or sell depending upon their current risk assessment & interest rate expectations, and fundamental investors that simply want to buy it all and hold forever. Over time, the #HODLers will win.

A wolf at the door

Co-Founder of crypto investment giant Paradigm, Matt Huang, explained Saylor’s point quite poetically last week as he stated that there are two wolves inside Bitcoin:

And the non-sovereign store of value (as a hedge against inflation, instability, autocracy, etc)

One wolf is getting stronger by the day…

Blankfein believes the wolf should be even stronger right now. I’m wondering if this is only the beginning. Since Blankfein sent that tweet, the price of Bitcoin has gone up 10%. It almost appears the crypto market bought the dip to spite him. Perhaps we are having a moment. Blankfein seems a little too impatient now that he’s warming to decentralization.