The hotly-contested nature of EOS decentralization and governance remains at the forefront of blockchain community discussion. 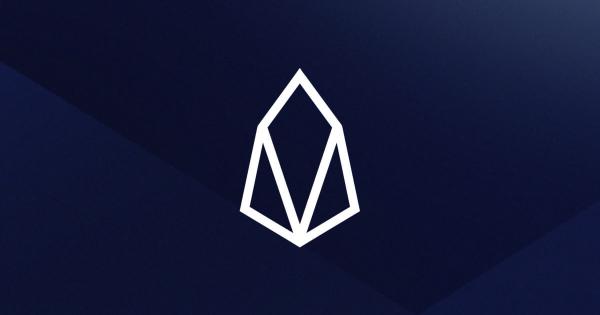 Photo by Pine Watt on Unsplash

The hotly-contested nature of EOS decentralization and governance remains at the forefront of blockchain community discussion. The recent inaction of an EOS block producer — resulting in the loss of 3,570 EOS, or about $27,500 — brought the EOS governance model under harsh scrutiny over the past week, as industry experts and observers debate whether EOS can be defined as a “decentralized” cryptocurrency.

The EOS project, which can be likened to a hybridized blockchain system where property rights are enforced via community sentiment, relies on 21 block producers that operate the network. These block producers are voted in by the EOS community and rewarded with EOS tokens.

Block producers contribute to a three-party system that composes the EOS governance architecture. EOS token holders are the second element of the EOS ecosystem, while the EOS Core Arbitration Forum (ECAF) function as arbitrators – whose role within the EOS ecosystem created a significant amount of controversy since the EOS mainnet launch.

The ECAF as an arbitration body within the EOS ecosystem is able to make decisions regarding EOS accounts deemed to be in violation of the EOS constitution. Recently, the EOS governance structure blacklisted a number of EOS accounts that were identified as associated with fraudulent activity. 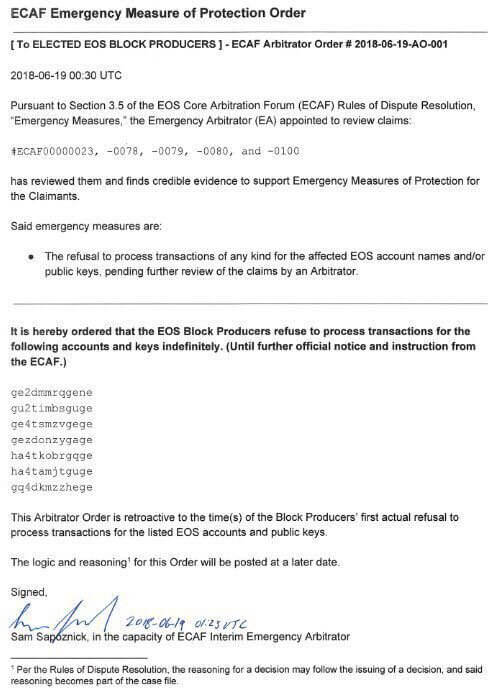 Blacklists are issued by ECAF and are delivered to block producer meetings. The reliance of the entire EOS ecosystem on these meetings is an apparent weak point in the $4 billion project, as a recent meeting that was missed by a critical block producer saw 3570 EOS lost in a governance failure.

Block producer EosStore was not compliant with an ECAF blacklist issuance, and as a result, an account lost funds. An official statement released by EosStore on June 26, 2018, confirmed the block producer did indeed neglect to update blacklist data:

“ECAF has provided two blacklists, however, the second blacklist was not discussed in the community Zoom meeting no formal announcement of it could be found.”

While EosStore did note that affected accounts will “absolutely” be compensated, a significant flaw within the EOS governance structure was highlighted — ECAF currently has no official channel to publish its announcements:

“EosStore now sends an invitation to all BPs to co-develop a software providing publishing platform for ECAF arbitration orders. Hope BPs join us to make sure the voice of ECAF be executed duly and consistently.”

The execution of ECAF blacklist orders has created dissent within the cryptocurrency community, with several industry experts expressing the perspective that the EOS governance model is at odds with the libertarian ideal of distributed ledger technology.

We have stuff like this. It's called the legacy financial system. Don't confuse it with a cryptocurrency. pic.twitter.com/5ANQSvgsrq

Strix Leviathan founder Jesse Proudman highlighted the importance of reliability in the governance structure of any large-scale network, sparking a heated discussion with cryptography and blockchain polymath Nick Szabo:

Those same groups have to be available 24×7 to run the network, so asking them to attend a meeting isn’t an unreasonable request.

This is one of the joys of running infrastructure.

With time, this process will become automated on the EOS network. For now, put in the work. https://t.co/yAIXsTCpFM

Proudman, an advisor to EOS Block Producer Cypherglass, was quick to reply to Szabo’s statement, emphasizing the need for rapid response times within the current iteration of the EOS governance structure:

Never claimed to be a crypto expert.

I’ve run enough 24×7 platforms to understand the need for a team able to respond to issues. EOS in its current form requires that of its BPs. My point is an elected BP in a production network should have that capability. That’s a simple ask.

Proudman broke down his statements in a discussion with CryptoSlate:

“An elected EOS Block Producer has an obligation to the community to maintain the operational integrity of the EOS network. If a BP can maintain a reliable infrastructure, it’s reasonable to expect they can maintain around the clock communications with the BP ecosystem.”

It’s not too late, states Proudman, for the EOS community to eliminate the root causes of the issues present within the EOS ecosystem:

“As many have recently pointed out, the EOS constitution requires too much human intervention. The meaningful part is that the constitution is new and amendable. The EOS community is aware of these issues and is working collectively to resolve them. These are evolutionary steps in a new crypto-asset and time will tell if EOS will be successful.”

Szabo, however, also expressed concerns regarding the EOS governance structure:

EOS didn't even begin to scratch the surface of what can go wrong with freezing or reversing transactions, which on a blockchain that spans 100s of human languages and 1000s of jurisdictions, can be deemed bad in a dizzying variety of ways, few of which can be well anticipated. https://t.co/VOMr4AQPH8

“An arbitrator should not ever have the power to take assets unless said assets were previously placed in control of the arbitrator. I don’t agree with placing all assets under the control of producers. I want to eliminate fraud at all levels, including the governance layer”

Nick Szabo is a computer scientist, legal scholar, and cryptographer known for his research in digital contracts and digital currency. Learn More