EOS, the most valuable initial coin offering (ICO) of all time that raised over $4 billion throughout its 1-year-long token sale, has recently received criticisms regarding its latest blockchain halt and controversial statements on its Termination of Agreement, or Article XV. 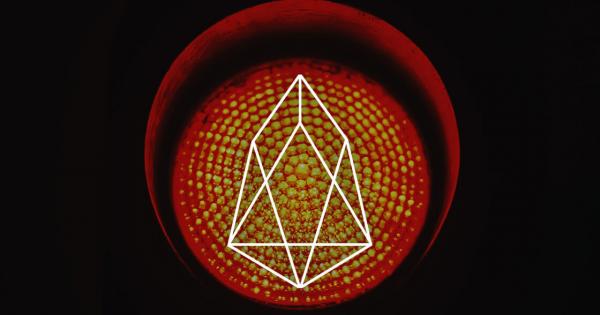 Photo by Erwan Hesry on Unsplash

EOS, the most valuable initial coin offering (ICO) of all time that raised over $4 billion throughout its 1-year-long token sale, has recently received criticisms regarding its latest blockchain halt and controversial statements on its Termination of Agreement, or Article XV.

Earlier this week, one of the members of an online cryptocurrency community released the Termination of Agreement between EOS and its investors, sparking a debate on the ability of the EOS team to gain control over user funds and reverse transactions.

“A Member is automatically released from all revocable obligations under this Constitution 3 years after the last transaction signed by that Member is incorporated into the blockchain. After 3 years of inactivity an account may be put up for auction and the proceeds distributed to all Members according to the system contract provisions then in effect for such redistribution.”

Essentially, the EOS team explained that if an EOS holder is inactive for more than three years, meaning the holder does not initiate any transaction or hold onto EOS without receiving or sending a transaction, EOS has the authority to take over the account.

On any other major public blockchain, it is up to the users to spend or hold their funds and it is unacceptable to take that authority away from the users.

If a blockchain project has the authority to reverse transactions and suspend the accounts of users, to begin with, it is difficult to argue that the project is decentralized to a large extent.

Even Rick Schlesinger, co-founder of EOS New York, who previously noted that the Termination of Agreement of EOS and the team’s ability to suspend accounts was specifically employed to prevent users from holding onto the cryptocurrency for years without contributing to the ecosystem, recently admitted that Article XV should be scrutinized and it is not appropriate for EOS to decide for what its users can use the tokens.

“I do think the community is going to scrutinize [Article XV] closely (as they should). This is why we’re here – to experiment with this nascent technology and learn about how a governed blockchain can respond to the community’s will.”

Still, Schlesinger criticized publications that reported EOS has a fund centralization issue, as those reports failed to consider the fact that exchanges account for the majority of EOS as of current.

“The key misstep Trustnodes and others have done is that they’re aggregating the exchange wallets which account for many thousands of individual accounts. If you do not extract these accounts the analysis will be incomplete: garbage in, garbage out.”

On June 17, the EOS blockchain was put to a halt after a bug was discovered merely several days after its mainnet launch. The EOS developer community revealed that the bug was originated from a NodeOS issue, which has since been fixed. Block.one, the company that oversees the development of EOS, announced the release of 1.05 with a block producer node and NodeOS upgrade.

“A method to unpause the chain was formulated and is currently underway. Normal EOS chain functions should be available within 3 to 6 hours from the time of the publication. Incoming connections to the network are not being accepted while the work is taking place. Please wait for an update from the Top 21 Block Producers before attempting EOS mainnet transactions.”

After raising $4 billion, EOS has been heavily criticized by industry experts, analysts, and its own investors for a few key controversial decisions and events, leading investors to speculate the long-term future of EOS and the standard of the codebase of the blockchain project.

The EOS team remains confident that it will be able to swiftly address bugs and upcoming issues without risking user funds. For long-term growth, experiencing early bugs could be beneficial for EOS as it may allow the blockchain project to develop resilience towards future attacks. But, as of current, some investors remain dissatisfied with EOS and the progress it has made since pre-mainnet launch.