The wMarket Update condenses the most important price movements in the crypto markets over the last 24-hours, published 08:00 UTC daily. 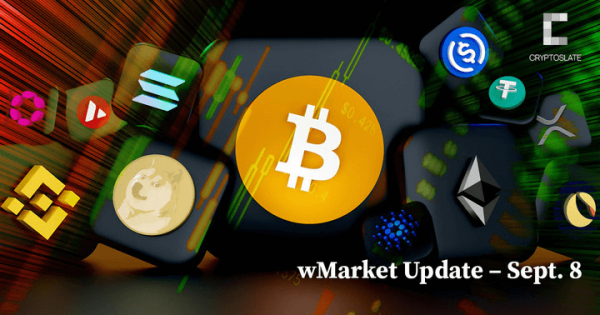 The total cryptocurrency market capitalization continued its recovery from the previous day and stood at $1.03 trillion at 06:00 UTC on Sept. 9 — up 2.17% during the last 24 hours.

The top 10 cryptocurrencies all posted gains, with Polkadot (DOT)’s 6.84% recording the most significant move, according to CryptoSlate data. Meanwhile, Dogecoin and Shiba Inu — which often break into the top 10 — ranked 11 and 13 over the past 24 hours.

Bitcoin (BTC) topped its recovery from the previous day with 7.25% growth over the past 24 hours, trading at around $20,525 at 06:00 UTC. BTC market dominance recovered slightly to 38.5% as of press time from 37.8% the previous day. However, despite the increase in market dominance, it remains at its lowest in more than four years.

ETH grew 5.12% over the past 24 hours to trade at around $1,700 at press time, adding to the previous day’s gains of 7.82%. While the anticipation for the Merge scheduled for last week has driven price growth, the network is returning to normal after the Bellatrix upgrade hiccups boosted it further. Ethereum dominance stood at 20.4% as of press time.

As the price growth slowed compared to the previous day, the total ETH staked in the ETH 2.0 contract spiked slightly to 14.31 million, according to Ethereum Foundation data.

VGX saw the sharpest decline in price over the past 24 hours, falling 19.94% to trade at around $0.88 as of press time. While the token posted gains over the past two days and crossed the $1 mark in the early hours of Sept. 8, it has lost nearly half its gains from the past week.

Voyager is set to auction its assets on Sept. 13, and the results would need to be approved in a court hearing scheduled for Sept. 29. The company had filed for Chapter 11 bankruptcy a few days after crypto hedge fund Three Arrows Capital went bust. Reports of Voyager fulfilling buy orders even after deposits and withdrawals were halted have put pressure on the price of VGX.

Adding to the previous day’s gains, USTC continued its growth until 12:00 UTC, when it started falling from around $0.051 to $0.042 at press time. The token is down 11.1% over the past 24 hours, with a market cap of $415.96 million. USTC was the algorithmic stablecoin of the Terra ecosystem that slipped off its peg and collapsed in May, triggering the market crash.

NTVRK is down 5.47% over the past 24 hours and was trading at around $0.22 at press time. The token is suffering due to the scandal of a former CEO alleging the project’s founders misappropriated user funds for personal luxury.

Polymath is a platform that enables the creation, issuance and trading of financial instruments on the blockchain. Learn More

Bitcoin Standard Hashrate Token aims to bring exchange-grade liquidity to Bitcoin mining and solve the current problem of a limited number of exit options while participating in the mining process. Learn More

Netvrk is a social virtual world built on the blockchain, that allows users to make and monetize their creations.. Learn More