Core Scientific might not make it past November 2023 after revealing $1.7B in losses Andjela Radmilac · 2 days ago · 2 min read
News › U.S.› Bitcoin › Mining

Core Scientific might not make it past November 2023 after revealing $1.7B in losses

Core Scientific said in its quarterly report that "substantial doubt" exists about its ability to continue going if it fails to raise liquidity. 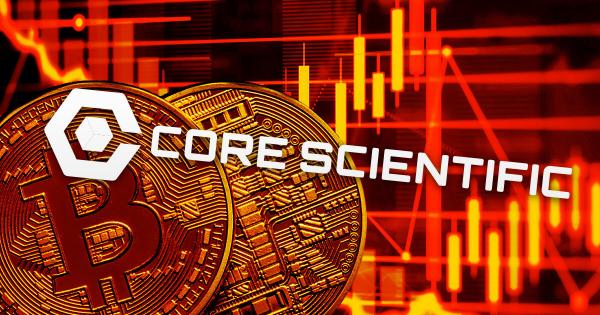 Core Scientific, one of the largest publicly traded Bitcoin miners, might not make it until the end of the year.

In its quarterly report filed with the SEC, the company said “substantial doubt” exists about its ability to continue going if it fails to raise liquidity.

“However, the ability to raise funds through financing and capital market transactions is subject to many risks and uncertainties and current market conditions have reduced the availability of these capital and liquidity sources.

The Company anticipates that existing cash resources will be depleted by the end of 2022 or sooner. Given the uncertainty regarding the Company’s financial condition, substantial doubt exists about the Company’s ability to continue as a going concern through November 2023.”

Doubts about the company’s solvency were first raised at the end of October when a previous filing revealed its operating performance and liquidity have been severely impacted by rising electricity costs and falling Bitcoin prices.

Core Scientific’s 10-Q filing now shows no doubt about the company’s struggles, as the company reported a $434.8 million net loss in the third quarter alone. The $862 million in net losses accrued in the second quarter bring the company’s total net losses for the nine months ended Sept. 30 to $1.71 billion.

Core Scientific claims that the losses it accrued were a result of rising electricity costs and a rapidly declining price of Bitcoin. The majority of the company’s revenue from hosting came from two customers — one accounted for 46% of its revenue in 2022, while the other accounted for 19%.

In a separate part of the filing, the company said Celsius was “one of its largest customers.” Since filing for voluntary relief under chapter 11 in September, Celsius has reportedly been attempting to withhold payment of certain charges billed as part of its contract with Core Scientific. The company is actively seeking a resolution from the bankruptcy court.

However, the filing reveals that losses Core Scientific accrued from other expenses could dwarf the amounts it’s seeking from Celsius.

The company revealed that it provides hosting services to entities that are managed and owned by its executives. It also sold mining equipment to its own executives, with the revenue from these sales more than doubling when compared to last year.

Since the beginning of the year, Core Scientific spent $1.8 million on private jets and business trips for its executives. It also lost $13.1 million on exchanges and entered into an agreement to lease office space for its new headquarters for a base rent of $14 million to be paid over a period of 130 months.