In an Oct. 26 SEC filing, Core Scientific said its operating performance and liquidity had been severely impacted by rising electricity costs and falling Bitcoin prices. 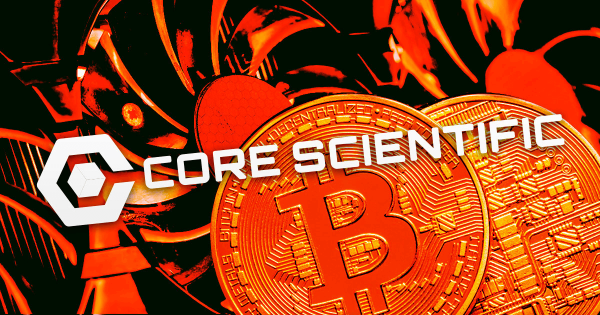 Core Scientific, one of the world’s largest publicly traded Bitcoin mining companies, is on the verge of insolvency.

In an Oct. 26 SEC filing, the company said its operating performance and liquidity had been severely impacted by rising electricity costs and falling Bitcoin prices.

The increase in hash rate has also drastically impaired the company’s ability to mine BTC, further affected by the ongoing litigation with Celsius.

In its 8-K filing, the company said its board has decided not to make payments due in late October and early November. The payments include equipment purchases, financings, and two bridge promissory notes.

Core Scientific said it was exploring several potential strategies to resolve its insolvency issues. These strategies include hiring additional strategic advisors, raising additional capital, and restructuring its existing capital structure. It will also explore liability management transactions, including exchanging its current debt for equity. Bankruptcy remains a viable option as well, the company said in the filing.

“In the event of a bankruptcy proceeding or insolvency, or restructuring of our capital structure, holders of the Company’s common stock could suffer a total loss of their investment.”

While it said it was difficult to estimate its total liquidity requirements, it noted that it anticipates its existing cash resources could be depleted by the end of 2022 or sooner.

“Given the uncertainty regarding the Company’s financial condition, substantial doubt exists about the Company’s ability to continue as a going concern for a reasonable period of time.”

Out of all the publicly traded Bitcoin mining companies on the market, Core Scientific has experienced the most significant drop in stock price. Data analyzed by CryptoSlate showed that CORZ lost over 90% of its value since the beginning of the year. While Core Scientific leads the way as the biggest loser, the entire Bitcoin mining market has experienced significant losses as it struggles with rising electricity costs and increasing hash rate.