Coinbase clarifies they were already participating in Russian sanctions

Coinbase reveals that they have been blocking sanctioned individuals and entities since their inception. 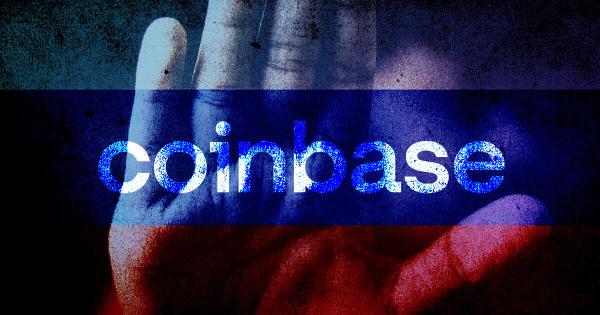 Today, Coinbase’s CFO Paul Grewal posted on the platform’s blog page announcing that Coinbase was already supporting the legal sanctions against Russia as a part of their goal to protect the integrity of all their transactions.

“In the past few weeks, governments around the world have imposed a range of sanctions on individuals and territories in response to Russia’s invasion of Ukraine. Sanctions play a vital role in promoting national security and deterring unlawful aggression, and Coinbase fully supports these efforts by government authorities.”

This conveys Coinbase’s support for the sanctions against Russia or any other entity implemented by a nation. In addition, Coinbase explained their implemented global sanctions program, constructed of three layers, reflecting these sanctions on their platform.

Coinbase also added they use a geofencing control mechanism that prevents access to Coinbase if the user is coming from a sanctioned location. In addition, they routinely subject their compliance program to internal testing and independent audits.

As Coinbase regularly updates the global sanctions lists they use, they can detect users who could open an account but were sanctioned by a government later. If a sanctioned version is detected, Coinbase also maps past transactions with a flagged address to pinpoint any associates.

Coinbase also mentioned that their blockchain analytics program can identify accounts held by sanctioned individuals outside of Coinbase.

To further elaborate, Coinbase gives a previous example where the United States sanctioned a Russian citizen in 2020, by including three associated addresses. As a result, Coinbase’s analytics program could pin more than 1,200 addresses associated with the individual in question.

Crypto assets are public, traceable, and permanent, they can be sanctioned much faster than fiat money can, benefiting the entire money laundering industry. To emphasize the advantage of crypto assets, Grewal said in his blog entry:

“Today, Coinbase blocks over 25,000 addresses related to Russian individuals or entities we believe to be engaging in illicit activity, many of which we have identified through our own proactive investigations. Once we identified these addresses, we shared them with the government to further support sanctions enforcement.”

All being said, two things are clear. First of all, Coinbase is clearly working towards building trust within the crypto space and shows great initiative to both carry out and enhance sanctions applied to individuals or entities. Secondly, Coinbase will not impose any sanctions on anyone unless there is a legal requirement to do so.

The second point was also made clear by the representatives at Coinbase prior when Ukraine asked major exchange platforms to freeze Russian IPs. This writing by Grewal announced Coinbase’s standing in the Russian-Ukraine tension once more.