Cardano’s Charles Hoskinson says Tether is a “faith based” crypto

Tether has soared since settling with the NYAG, but analysis of its reserves shows less than 3.9% cash on hand. 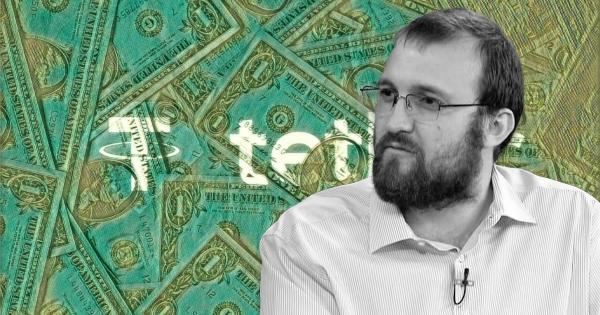 He added that as much as regulation gets a bad rap, without it, there would be no checks on companies who make particular claims.

With USDT liquidity supporting significant swathes of the cryptocurrency market, is the Tether controversy a ticking time bomb waiting to go off?

This agreement enabled Bitfinex to sidestep allegations that it covered up an $850 million loss in customer funds held by a payment processor. It also halted further investigations into Tether’s reserves.

Some claim that Tether does not have sufficient reserves to match the USDT in circulation. Bitfinex CTO Paolo Ardoino said USDT is 100% backed and the firm is working hard to improve transparency.

Under the terms of the settlement, Bitfinex and Tether will admit no wrongdoing. But will provide quarterly reports describing Tether’s reserve composition for the next two years.

However, there is no mention that these reports are subject to audit.

Even though Tether is now banned in the state of New York, since the settlement, USDT has exploded in market cap. On February 23, it had a market cap of $34.7 billion. But in the four months since settling with the NYAG, it has grown 80% hitting a $62.5 billion valuation today.

Hoskinson weighs in on the controversy

Focusing on the controversy surrounding Tether reserves, Hoskinson questioned whether a player the size of Tether can/should be operating in the gray area it currently finds itself.

“You have to understand that the only reason that Tether is worth something is that a centralized company asserts that every unit that has been issued of this Tether asset is linked, somehow, someway, to an equivalent amount of value, a dollar worth of value sitting in a bank account,” he said.

In line with the NYAG settlement agreement, Tether recently released a breakdown of their reserve holdings. It showed:

A further breakdown of “Cash & Cash Equivalents & Other Short-Term Deposits & Commercial Paper,” shows only 3.9% relates to cash. With “Commercial Paper” being the biggest component at 65%.

Martin Walker, the Director of Banking and Finance at the Centre For Evidence-Based Management said only a small proportion of the reserves relates to cash. From that, Walker accused Tether of operating as a bank, but without the equivalent oversight.

Add to that the breakdown being unaudited, and Hoskinson is correct in saying Tether is a faith-based entity.

“When you move to asset-backed tokens, like Tether, then you have a situation of how do you know that the asset is really there, and the promises, commitments, and representations are really true?”

In a situation where Tether goes down, many would look to the NYAG as not having done enough to prevent such a scenario from playing out.