The two privacy pioneers will discuss the evolution of the decentralized internet at the BlockDown: DeData Conference on December 3, 2021. 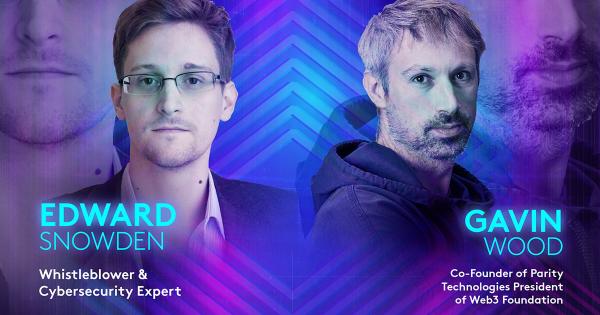 This Friday, famed privacy activist Edward Snowden will be talking to Gavin Wood—, Creator of Polkadot, co-founder of Ethereum and coiner of the term “Web3”,—for a fireside chat at the BlockDown DeData conference, an event exploring data ownership, privacy, Web3, personal information security and self-governance in detail through panels, keynotes, fireside chats and debates.

Wood and Snowden have an extensive history, of sorts. After Snowden’s paradigm-shifting revelations about NSA surveillance, and the ways the US government—with the help of its allies and big business—were systematically monitoring the world’s citizens, Wood coined the term “post-Snowden” web to describe a future where the internet was less dominated by large, centralised forces.

“Web 3.0, or as might be termed the “post-Snowden” web, is a reimagination of the sorts of things that we already use the Web for,” Wood wrote in a blog post in 2014. “But with a fundamentally different model for the interactions between parties.

The discussion between the two privacy and decentralisation advocates will take place between 12:40 and 1:10pm Eastern Standard Time, and will be streamed across top media in the crypto space including CryptoSlate and Theta.tv.

Last month, Snowden—an enthusiast for blockchain technology and cryptocurrencies—revealed that he used Bitcoin to hide his identity when buying the servers that made the NSA leaks possible. “You know that whole NSA story from almost TEN YEARS AGO? I paid for the servers that made that possible… using Bitcoin,” he said in a tweet.

Snowden will be appearing alongside privacy and security experts, industry leaders and academics, including David Chaum—the inventor of digital currency and the “godfather of privacy”.

programs conducted by the United States and the Five Eyes Intelligence Alliance (UK, Australia, Canada, New Zealand) with the cooperation of telecommunication companies and European governments, which prompted a global discussion about individual rights, privacy and government monitoring and abuse of personal data.

BlockDown DeData aims to educate the public about the use and abuse of data in a world where everybody is a digital citizen. Nowadays, security breaches and manipulation of data can be powerful enough to put entire countries at risk, cripple large institutions, affect the way we see the world and even turn the results of government elections.

Erhan Korhaliller, CEO of leading Web3 PR Agency EAK Digital and founder of BlockDown, said the event would educate, inspire and make people aware of the importance of data in this era.

“DeData’ puts the power back into the hands of individuals. We look forward to welcoming guests to Blockdown so they can find out more about what Decentralized Data is and the many different advantages and current possibilities of taking control of your data. Your crypto is making yields, so why not your data?”

Previous editions of BlockDown have already attracted some of the biggest names in the industry including Akon, CZ, Charles Hoskinson, Erik Voorhees, Sergey Nazarov, Roger Ver and Nicholas Merten from DataDash, all providing glowing feedback.

Disclaimer: CryptoSlate is a media partner for BlockDown DeData.