Jack Mallers of Strike announced in Miami that Bitcoin will be available via the Lightning Network to over 400,000 storefronts and all US Shopify sites. 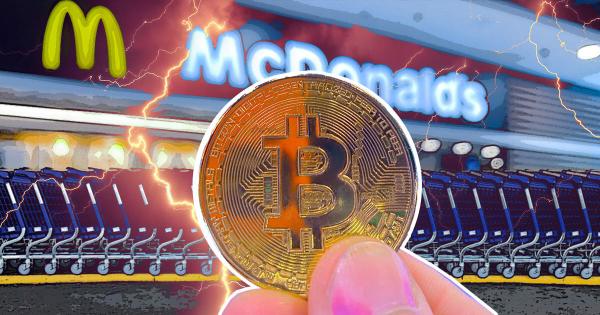 Jack Mallers, founder of Zap, is bringing Bitcoin back to its roots with an announcement that his Lightning Network wallet, Strike, has partnered with Shopify, NCR, and Blackhawk Network.

According to Mallers, any website that uses Shopify online card transactions can now process payments using Bitcoin’s Lightning Network. The partnership is live right now and a massive step toward the mass adoption of Bitcoin.

“Any online merchant that uses Shopify can accept payments without the 1949 boomer network, receive it instantly, cash final, no intermediary no 3% fee”

During the presentation, a slide appeared listing some of the biggest retailers in America, including McDonald’s, Walmart, Home Depot, and Best Buy. According to their websites, Blackhawk and NCR also serve Starbucks, Chipotle, El Corte Ingles, Lowe’s, Staples, Woolworths, and thousands of other global retailers.

We will have to wait for more details to understand exactly when and how some of these retailers will start accepting Bitcoin. However, Maller claims that over 400,000 storefronts will now accept Bitcoin via the Lightning Network.

Over the past few weeks, Robinhood, Kraken, and Bitpay have integrated the Lightning Network. The Lightning Network is a layer two solution for the Bitcoin blockchain that uses smart contracts to settle payments instantly with meager fees.

It promotes using Bitcoin as a digital currency rather than concentrating solely on its function as digital gold. Much focus has been on Bitcoin acting as an inflation hedge and a competitor to gold.

The Lightning Network allows Bitcoin to scale to also compete with every fiat currency on the planet. Instantly settling payments with close to 0% fees is hard to compete against. Maller has just announced a significant step forward in adopting cryptocurrencies as a day-to-day payment solution. There has been plenty of support for Mallers’ presentation, with Twitter’s Jack Dorsey publicly sending his support.

thank you @jackmallers. you're an incredible inspiration.

Hundreds of millions of people can now spend bitcoin or dollars across the Lightning Network instantaneously, completely for free at every major US retailer.

I don’t think anyone comprehends the true magnitude of @jackmallers announcement today. This changes everything.

“There’s not been since 1949 a superior payments network that allows us to innovate, build on financial inclusion, offer cheaper services faster services. My grandfather used the same technology as I do. That’s not American, that’s bullshit.”

According to his presentation, retailers will be able to receive Bitcoin from customers and instantly convert it to fiat without any fees or processing delays. Whichever currency the retailer wishes to settle their payments in “doesn’t matter,” according to Mallers.

The price of Bitcoin hasn’t reacted to this news as of yet. It may feel too big and too good to be true for many investors. Adoption of this scale doesn’t usually happen overnight. Has Bitcoin finally made it into the mainstream, or will retailers create extreme and sustained sell pressure on Bitcoin’s price?

CEO of Zap, a bitcoin investment and payments company that transacts over the Lightning Network. Learn More