Bitcoin saw a choppy weekend but surged 5% on Monday. Meanwhile, a leading Binance Smart Chain DEX carved a new high (metric) for itself. 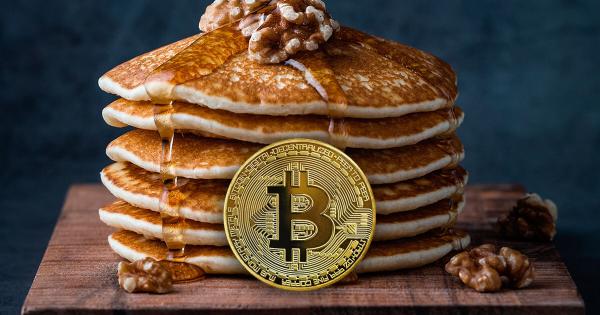 Photo by Mae Mu on Unsplash

Bitcoin surged on Monday following a choppy weekend that saw the asset plunge to as low as $50,290. It trades over $58,000 at press time amidst a broader price rise in the crypto market on the back of an announcement by Visa.

As the below image shows, the asset trades above its 34-period exponential moving average—a tool used by traders to determine the market trend—meaning Bitcoin is currently in an ‘uptrend.’ The $58,200 mark, however, is an area of resistance, with Bitcoin seeing sell-offs in the past weeks that it reached this price level.

HODLers are continuing to hold their Bitcoin, however, a metric from on-chain analytics provider Glassnode shows. The ‘Supply Last Active’ indicator—a tool the amount of circulating supply last moved between 3 months and 6 months ago—reached a 15-month high of over a million BTC.

On the fundamental side, Bitcoin was buoyed by last week’s announcement involving Tesla. The electric carmaker, the world’s largest by market cap, said it would accept Bitcoin payments for its vehicle and would not convert the asset into fiat. This was the first-ever such move by a major company.

The rise of PancakeSwap

Meanwhile, PancakeSwap recorded some of the highest gains over the past week among large-cap altcoins. It surged over 70%—from under $10 to over $17—on higher demand for its CAKE token, which was itself caused by the large number of users turning to the Binance Smart Chain-based decentralized exchange (DEX) for its low-fee and fast trading experience.

The CAKE token supply is now worth over $2.5 billion with over 145 million tokens in circulation. It can be used on PancakeSwap as a liquidity provider (LP) token with use-cases ranging from NFT minting to ‘IFOs,’ trading, and even a lottery game.

PancakeSwap also crossed the $6 billion total value locked (TVL) figure last week. It is now above popular Ethereum DeFi protocols like Aave, SushiSwap, and even Compound, but it loses out by a relatively slight margin to Maker’s $6.6 billion TVL (the Ethereum-based protocol has the highest TVL in the crypto space).

Meanwhile, tith the increase in TVL came the increase in the number of LPs on PancakeSwap. “PancakeSwap currently has 16,891 unique LPs. Last week there was 11k and before that, just over 6k,” the team said in a tweet.

Last week there was 11k and before that, just over 6k.

It is a victory of sorts for the Binance Smart Chain-based DEX, one that pundits wrote off after its launch in mid-2020. PancakeSwap has since grown from strength to strength, suggesting that at the end of the day, it is fees (and not just decentralization) that count.