The world’s largest cryptocurrency jumped 3% amidst news of a Bitcoin ETF getting approved in the US. 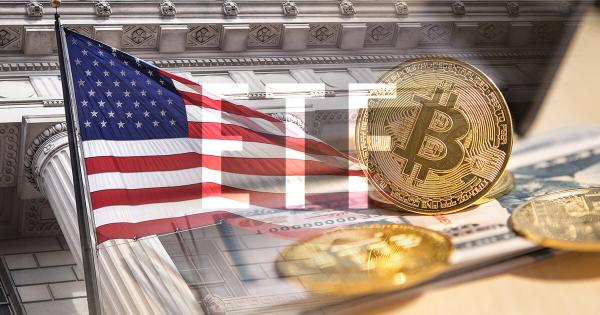 Bitcoin temporarily broke the $60,000 level this morning amid reports of a Bitcoin exchange-traded fund (ETF) nearing approval in the US.

The asset since fell to $59,500 at press time as traders took profits from the $1,500 move. Over $69 million worth of Bitcoin trades were liquidated as a result, data from analytics app Bybt shows.

Bitcoin ETFs and why they matter

ETFs are regulated institutional products that track an index, sector, commodity, or another asset (like crypto) and are majorly used by traditional finance players to bet on such assets or hedge against related sectors.

Approval of a Bitcoin ETF in the US has long been mulled in crypto circles but has mostly seen rejection from the country’s Securities and Exchange Commission. However, such woes seem to be coming to an end—with sources expecting the Bitcoin ETF to be approved as early as this month.

“The regulator isn’t likely to block the products from starting to trade next week,” said the people, who asked to remain anonymous. The current Bitcoin ETF applications filed with the regulator are futures-based—unlike previously rejected applicants who filed for a spot-based product— and offered by ProShares and Invesco Ltd.

The contracts were filed under mutual fund rules that SEC Chairman Gary Gensler has said provide “significant investor protections.” This is a changed stance from the previous administration, which distanced itself from regulated crypto offerings in the US.

The fund launch will be the culmination of a nearly decade-long campaign by the $6.7 trillion ETF industry. As such, four futures-backed Bitcoin ETFs could begin trading on U.S. exchanges this month, with deadlines for applications from VanEck and Valkyrie also approaching.

Meanwhile, some crypto proponents stated the market was pricing in the impending ETF approval and that Bitcoin prices were set to only move further.

“Smart money typically “sells the news” (i.e. sells when the news actually occurs). In this case, it would be unwise. The flow of funds unlocked by an ETF approval will be massive,” said Vijay Boyapati, soothing fears of a price dump right after the ETF was listed.

The market is clearly pricing in the approval of a #Bitcoin ETF (probably futures based).

Smart money typically "sells the news" (i.e. sells when the news actually occurs). In this case it would be unwise. The flow of funds unlocked by an ETF approval will be massive.

Some did display skepticism, however, “It’s been many years of #Bitcoin ETF anticipation, and while approval appears imminent, crypto paranoia leaves a small part of me wondering if we get our chain yanked,” said Placeholder VC founder Chris Burniske.