Nassim Nicholas Taleb slammed Bitcoin, arguing that "there’s absolutely no reason it should be linked to anything economic." 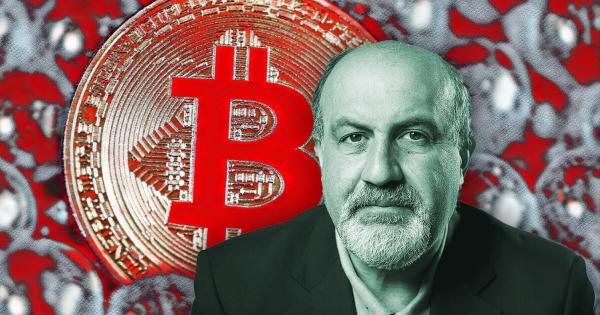 "Stay out of #bitcoin. Buy stocks that are stable and buy things you understand," @nntaleb on how to hedge risk in today's market. pic.twitter.com/xvNXuguRwa

“These gimmicks, you have Bitcoin today. You may have another one tomorrow. They come and go, and there’s no systematic link between them and the claims they make,” he argued, adding, “It’s a beautifully set up cryptographic system. It’s well made but there’s absolutely no reason it should be linked to anything economic.”

A Ponzi scheme without malefactors

A Ponzi (pyramid) scheme, named after its creator Charles Ponzi, is a method of fraud where malicious actors are siphoning funds out of unsuspecting victims by promising them great returns. Simultaneously, crooks rely on inflows of “fresh blood” into their scheme to actually pay some amounts of cash to previous investors—in exchange for bringing in new ones.

In this light, Bitcoin can indeed be perceived as a global, decentralized Ponzi scheme that doesn’t even have any specific organizers behind it. As it stands, most people buy Bitcoin expecting its price to grow—and that is only possible when new people start buying the crypto. This creates a perpetual cycle of price appreciation where early investors essentially get rewarded when new people buy the asset at increased prices.

Despite that Taleb has spoken much more positively about Bitcoin in the past, his views changed over the past couple of years. Partly this is because the narrative around Bitcoin has shifted from it being a currency—as in “medium of exchange”—to being a store of value or even “digital gold.”

Not so much of a currency

Speaking to CNBC, however, Taleb explained that an asset whose price can easily move by 20% or more in a month “cannot be a currency. It’s something else.”

“I bought into it […] not willing to have capital appreciation, so much as wanting to have an alternative to the fiat currency issued by central banks: A currency without a government,” Taleb explained, adding, “I realized it was not a currency without a government. It was just pure speculation. It’s just like a game. I mean, you can create another game and call it a currency.”

Investors who want to offset inflation would be better off allocating their money into something tangible that can bring them yields in the future, Taleb argued. As an example, he suggested buying a piece of land and growing olives on it. The latter can be turned into olive oil, for example, and “if the price collapses, you’ll have something.”

“But Bitcoin, there’s no connection and, of course, the best strategy for investors is to own things that produce yields in the future. In other words, you can fall back on real dollars coming out of the company,” Taleb concluded.