The exchange said that a stuck on-chain transaction was causing a backlog but that BTC withdrawals are still possible on other networks. 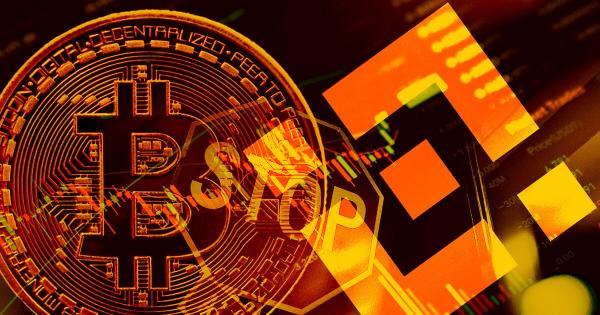 Binance has paused Bitcoin (BTC) withdrawals from the exchange as it works to resolve an issue with a stuck transaction.

Withdrawals have been paused for over an hour at press time. This has caused panic on the market as many rushed to move their Bitcoin holdings to cold wallets after Celsius halted all withdrawals from the platform.

Binance CEO Changpeng Zhao tweeted June 13 that the exchange paused withdrawals to deal with a stuck Bitcoin transaction that was causing a backlog. He noted that this has only impacted the Bitcoin network and that users are still able to withdraw their Bitcoin on the Ethereum Network or Binance Smart Chain.

However, his initial estimates as to how long it will take to resolve the issue turned out to be wrong and withdrawals have been suspended since 11:43 UTC.

Temporary pause of $BTC withdrawals on #Binance due to a stuck transaction causing a backlog. Should be fixed in ~30 minutes. Will update.

In an official statement, Binance said that a batch of transactions got stuck as users submitted low transaction fees. This has resulted in a backlog of Bitcoin network withdrawals that its team was working on solving.

“Binance will reopen withdrawals on the Bitcoin (BTC) network once our withdrawal system becomes stable.”

Binance noted that some pending requests to move Bitcoin off the exchange might be rejected once the issue is resolved and that users will need to resubmit their requests if affected by this issue.

The exchange’s announcement was not well-received by the crypto community as many accused it of lying about the issue to prevent a Bitcoin sell-off. Thousands of users criticized the exchange on Twitter, saying that it was trying to protect its own liquidity after a similar issue with Celsius caused liquidations across the market.

Neither Binance nor Changpeng Zhao could be reached for comment by press time.