Binance is embracing regulation as it eyes UAE for its next global hub Andjela Radmilac · 11 months ago · 2 min read
News › U.A.E.› Binance › Regulation

CZ is becoming a fixture in the UAE and wants to bring Binance into the country's booming crypto scene. 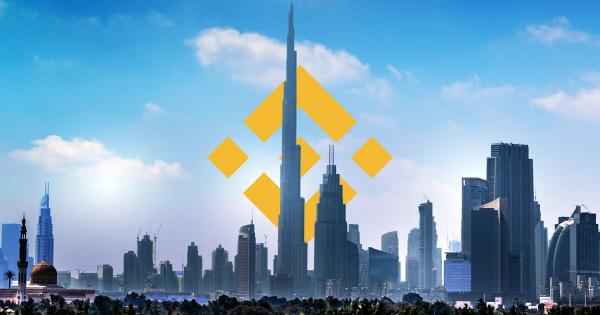 The world’s largest cryptocurrency exchange has had a turbulent year when it comes to regulation. With market authorities around the globe clamping down on Binance for its alleged failure to comply with local AML laws, the exchange has been on the lookout for new headquarters.

Its CEO Changpeng Zhao, known as CZ in the crypto sphere, is yet to announce where the exchange will put down its roots. However, sources close to the matter recently revealed to Bloomberg that the crypto pioneer, worth $96 billion, is eyeing the United Arab Emirates as Binance’s next hub.

CZ is settling down in the UAE and so could Binance

Despite being the largest exchange in the crypto industry and one of the most valuable companies in the world, Binance has no formal home. Founded in China in 2017, the company was forced to transfer its business to Japan after Chinese authorities outlawed cryptocurrency trading in the country. After a short stint in the crypto unfriendly Japan, Binance self-exiled to Malta, where the government’s pro-crypto stance promised more freedom for the booming exchange.

Following controversy with Malta’s financial regulator, which claimed it had no oversight of the exchange, Binance was, yet again, left without a home. The only semblance of headquarters was its presence in Singapore, where the company had a significant number of employees.

However, even its Singapore presence is being tested by local regulators—last month, Binance withdrew its licensing application due to its failure to comply with Singapore’s anti-money laundering rules.

While it’s incorporated in the Cayman Islands, neither Binance nor CZ have shown any interest in establishing proper headquarters in the Caribbean.

So, where does a company estimated to be worth $300 billion go?

According to sources familiar with the matter, Binance is eyeing the United Arab Emirates as its next global hub.

In the past few months, CZ has become a fixture in the UAE. He reportedly scooped up a sprawling apartment in Dubai and has been hosting dinners for the city’s most influential.

The majority of his time in the UAE seems to be spent in Abu Dhabi, where was seen meeting with the royal family. These meetings were all business and no pleasure, sources told Bloomberg, as the royal family is eager to bring Binance into the country.

These rumors are in line with Binance’s latest effort to work with regulators in the UAE.

Last month, the company signed a Memorandum of Understanding (MOU) with the Dubai World Trade Center Authority (DWCTA) to “outline the vision of accelerating the set-up of a new industry hub for global virtual assets.”

The agreement came just a day after the DWCTA revealed plans to become a regulator for virtual assets and cryptocurrencies. The organization said it wants to create an “attractive environment” for the crypto industry by working in tandem with private companies and other relevant entities—the most relevant one being Binance.

After being reprimanded by the Canadian securities regulator last month, the exchange doubled down on its commitment to work with regulators. A spokesperson for Binance said that the company was working with regulators “around the world” and it was taking its compliance obligations very seriously.

CZ himself has said that he welcomes and wants regulation, especially in the crypto sphere.

“I’m not an anarchist,” he said at the Bloomberg New Economy Forum in Singapore. “I don’t believe human civilization is advanced enough to live in a world without rules.”