Billionaire traders Point72 and Soros pile into Bitcoin. Some call it a ‘top’

Institutional traders are making moves in the crypto space. But not everyone is pleased. 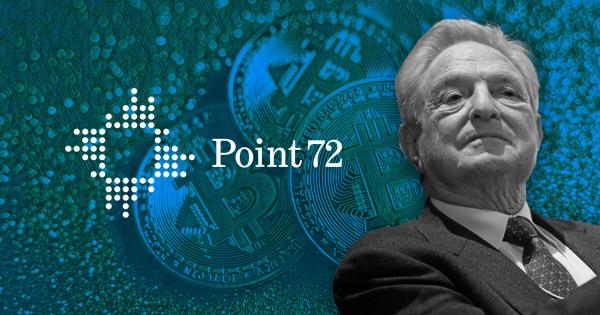 Soros, 90, who famously shorted the British Pound in 1992 and made a billion dollars on the trade alone, was known in his heyday as one of the best currency traders in the world.

And his fund’s now looking to make a similar impact on the Bitcoin market. Fund CIO Dawn Fitzpatrick is said to have approved traders to take BTC positions in the past few weeks, coinciding with the gradual fall of the world’s largest cryptocurrency.

The move came months after Fitzpatrick confirmed her interest in the space. “There’s a real fear of debasing fiat currencies. Bitcoin, I don’t think it’s a currency, I think it’s a commodity that’s easily stored and transferable, with a finite supply,” she said in March, adding the market was reaching an ‘inflection’ point.

Elsewhere, Point72 is seeking a head of cryptocurrencies. The fund manages billions of dollars across several asset classes but was yet to dip its toes in the burgeoning crypto market. Until now.

The fund made no comments yesterday. However, in a May letter to investors, Point72 executives noted they were “exploring opportunities around blockchain technology and its transformative and disruptive capabilities.”

“We would be remiss to ignore a now $2 trillion cryptocurrency market,” the letter said.

Bitcoin trades at $34,000 at press time, down nearly -40% since April highs of $64,000. Institutional interest in the space reached an all-time high earlier this year, with banks announcing dedicated crypto trading desks and wealthy investors demanding more exposure to the growing space.

But such moves are not necessarily driven by the adoption of cryptocurrency, but rather by the profit opportunities that it presents.

Bitcoin volumes reach billions of dollars each day and the asset bumps up and down several percent daily—making it one of the few highly liquid and volatile assets to trade.

Indeed, some of the Bitcoin community on social media voiced their concerns about Soros’ move. “Everything this guy touches goes bankrupt, So far,” said one commenter. “This guy is bad news,” said yet another.

Everything this guy touches goes bankrupt, So far.

Even Anthony Pompliano, the founder of crypto venture fund Pomp Investments, chimed in a separate tweet, “This could be a positive or a negative depending on how they trade it.” The traders sure are waiting.