Otherside metaverse lands would only be sold to wallets that are KYC-approved. 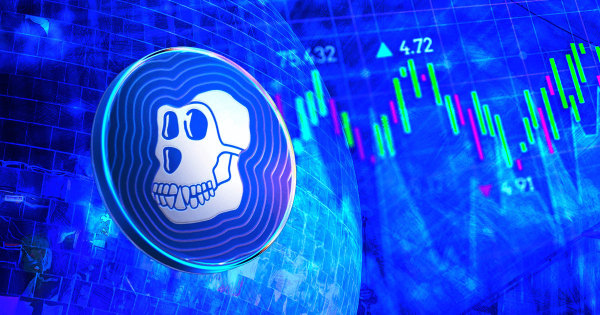 ApeCoin price continues to soar to new highs despite the generally mixed performance of the overall crypto market.


The Bored Ape affiliated token reached a new all-time high of over $26.7 on April 28 on the back of the announcement of the upcoming Otherside land auction.

The Otherside is coming

The Otherside is a metaverse project by Yuga Labs, the company behind the Bored Ape NFTs. The land auction will start on April 30, with 100,000 plots available for minting.

See you on the Otherside in April. Powered by @apecoin pic.twitter.com/1cnSk1CjXS

According to the announcement, only KYC-approved wallets could participate in the auction. It also stated that the price of an “Otherdeed NFT will be a flat price of 305 ApeCoin” and it would be limited to “of 2 NFTs per wallet at the start of the sale.”

According to its announcement, BAYC and MAYC holders will be able to claim an NFT within 21 days of the auction.

The developers have also worked to allay the fears that using ApeCoin to buy land will give the developers and corporate brands more voting power in the ApeCoin ecosystem.


Any ApeCoin earned from the auction would be locked up for a year, so it can’t be used for voting.

This news has been a major catalyst for ApeCoin’s recent price upsurge as the coin will be used for the auction. This confirmed earlier rumors and has encouraged a higher demand for the token.


In a crypto market that has been full of downs, NFT and Metaverse tokens have made some interesting returns for investors since the beginning of the year.

Otherside is only one of the many projects involving ApeCoin. Already, Animoca has submitted a proposal for ApeCoin staking that’ll see those who stake get 17.5% of the total ApeCoin supply as a reward in the next three years.