After his NFT project went viral on Twitter, young Benyamin Ahmed had to clear out the FUD surrounding his identity. 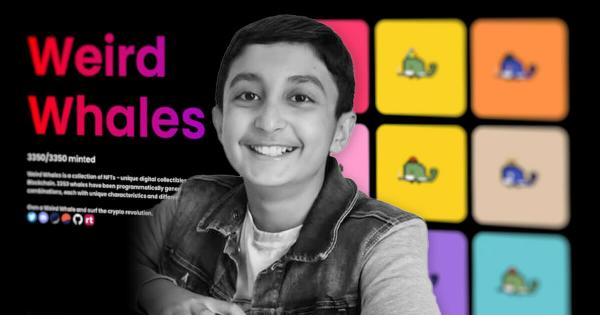 Benyamin Ahmed, a 12-year-old British Pakistani boy has made around $400,000 after launching his very own non-fungible token (NFT) project, Weird Whales.

The young programmer wrapped up the project featuring 3,350 programmatically-generated pixel whales during school holidays and made a small fortune after his artwork went viral on Twitter.

“I completed everything and put it up on sale and within five weeks, I made over £290,000 and it’s growing,” Benjamin told Geo.tv in an interview.

“I had only a few followers on my Twitter. Luckily, someone big on Twitter sharing the same interest retweeted me and today I have over 12,000 followers – from the BBC to New York Post to Geo News – everyone has picked up my news,” he added, while explaining how his project, which sold out within hours, went viral.

What a cool story behind Weird Whales NFT.

12 year old builds and launches his own NFT project?

Can't pass up on that part of history.

I barely minted 20 before it sold out.

“Benyamin has become a hit because he’s only 12. He’s highly creative, has no bank account and no accountant, therefore, he keeps his money in an online blockchain,” said Benjamin’s father, Imran Ahmed, a software developer who started teaching his sons how to code when they were five years old.

There's been more demand for due diligence and skepticism on a 12yr old's project than 99% of other generative NFT projects. The same people have aped into complete anon projects knowing nothing about the people behind them or who did any of the work and demanded nothing.

But the young programmer promptly reacted and cleared the doubt on Twitter, while posting a follow-up video on YouTube, featuring him sitting at the computer with Weird Whales on-screen.

Hey All, lots of nice DMs, thanks! A few people asked about my NFT and coding journey, here goes:

Soon, the apologies for spreading the FUD followed.

big apology to @ObiWanBenoni as well

It’s exciting to become the “youngest programmer in the world to earn this much money online without having a bank account,” according to Benjamin.

“I know the price value fluctuates in this market but this is the future and this is here to stay,” said the young programmer after revealing that he has stored his earnings in Ethereum (ETH).

He added that Weird Whales is his second collection and that his earlier “Minecraft-inspired set didn’t sell well.”