Yuga Labs is suing Ryder Ripps for defamation following his claims of BAYC being inspired by Nazi symbology. 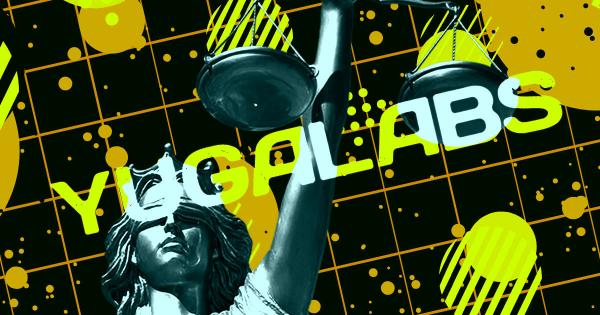 Yuga Labs, the company behind Bored Ape Yacht Club, has issued a legal complaint against Ryder Ripps, the creator of gordongoner.net. The founders of BAYC recently called Ripps’ accusations that they are “intentionally embedding Nazi dog whistles throughout their project,” a “crazy disinformation campaign.” The complaint, filed at the District Court of California, states:

The filing also requests a jury trial to settle the matter. Blockchain whistleblower, FatManTerra commented, “If you are guilty, it should be known. If you are innocent, you don’t deserve to be slandered. A careful analysis of evidence in a court of law is the best way to determine this.”

Ripps created his own collection of NFTs branded RR/BAYC and sold them via his website for 0.15 ETH. According to the website, the RR versions are sold out and momentarily overtook the main project in volume. At 10,000 NFTs, Ripps will have made an estimated $1.8 million from the collection, something Yuga Labs refers to as “ill-gotten profit.”

The first part of the complaint argues that Ripps has been “trolling Yuga Labs and scamming consumers into purchasing RR/BAYC NFTs by misusing Yuga Labs’ trademarks.” Yuga Labs believes Ripps is attempting to “devalue” the BAYC project by issuing his own RR/BAYC NFTs and “flooding the market.”

Ripps’ NFT collection was recently removed from several NFT platforms, including OpenSea and Foundation. However, Ripps posted an email to Twitter stating that the NFTs would be relisted on Foundation just hours before the lawsuit was made public. At this time, a DMCA notification still stops users from viewing the RR/BAYC NFTs on Foundation, and they are still unavailable on OpenSea. Yuga Labs argues,

“Ripps claims his actions are “satire,” yet he conveniently rakes in
millions in ill-gotten profit from sales of the RR/BAYC NFTs using Yuga Labs’ marks to make those sales. Copying is not satire, it is theft. And lying to consumers is not conceptual art, it is deception.”

Yuga Labs ultimately seeks injunctive relief and damages for false advertising, false designation of origin, cybersquatting, and unfair competition. The mention of cybersquatting indicates that Yuga Labs may also be going after the domain name gordongoner.net which uses the BAYC founder’s name.

Ryder Ripps is a digital artist listed in Forbes 30 under 30 in 2016, having worked with several household celebrities. In response, Ripps took to Twitter to post a series of tweets comparing the move to trying to ban Saturday Night Live, art, or satire.

Ripps has publicly admitted that the current state of BAYC appears at odds with its alleged “nazi origins.” In a previous Twitter Space with OKHotshot, Ripps said in a recent interview that BAYC’s attempt to walk back its Nazi origins is similar to “black people reclaiming the n-word” and its “fucking genius.”

The artist also distanced himself from the recent YouTube video that resurfaced the claims of racism by reaffirming that he did not create the documentary. He has, however, continued his mission to expose the origins of BAYC by continuing to post imagery claiming its Nazi origins.

Others in the industry agree there are some unnerving coincidences brought to light by Ripps. Alex Fazel, the co-founder of Swissborg, commented that there is “some twisted stuff in this story & very unusual “coincidences.” I’m not accusing anyone yet.” Cory Klippsten of Swan Bitcoin appears to support Ripps’ claims saying entirely;

“I’d put it at 99.99% the project is in fact a deliberate troll, intentionally replete with Nazi symbols and esoteric racist dog whistles.”

Interestingly, according to the legal documents, Yuga Labs states that its trademark is still pending after being filed in 2021. According to Intellectual Property lawyer Gerben, “rights in a pending trademark application are minimal. You do not have the rights of a federal trademark registration until the USPTO reviews and approves your application.” As a result, copyright infringement is not one of the complaints filed against Ripps. IP lawyer and NFT collector, Greb0wski informed CryptoSlate,

“Yuga cite ‘common law trademark rights’ – this is unregistered rights that accrue to a mark holder prior to registration. (TM vs (R). In the UK this would be the tort of ‘passing off. Common law TM rights are not as strong as fully registered ones, but do serve to protect brand holders from 3rd parties copying their brand’”

Yuga Labs’ difficulty in suing Ryder Ripps over copyright could also have a knock-on effect for investors; Greb0wski clarified that “it’s is an interesting question of whether Yuga can enforce copyright for ape holders.”

Should this case make it to court, it will surely be one of the most-watched crypto trials in history. The publicity will likely benefit all parties, and the community will get a legal ruling on the true origin of the Bored Ape Yacht Club.