Yahoo Finance and Investing.com post a fake news article claiming Bitcoin is down 56% 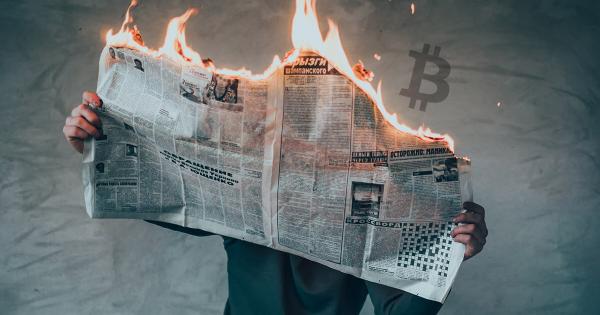 Earlier this week, Yahoo Finance and Investing.com both posted and shared an article that falsely claimed Bitcoin’s price plunged almost 56 percent in a single day. The article has most likely been written by a bot in a bit to drive ad revenue to the website due to the popularity of the topic.

While the crypto industry never lacks outrageous predictions and untrustworthy sources, the article that surfaced earlier this week put all previous clickbait titles to shame. On Feb. 4, Yahoo Finance and Investing.com, both well-known and trusted financial media outlets, published an article that claimed Bitcoin lost more than half of its value in a single day.

The article, titled “Bitcoin Plunges 56% in Rout,” quickly began making rounds in the crypto space on Twitter and Reddit, much to the disbelief of the community. The outrage with which the articles were met didn’t last long, though—both were quickly removed from the platforms.

Around 300-words long, both articles claimed that the downward move that Bitcoin saw pushed its market cap down to $165.9 billion, but failed to add any sources or more detailed information.

The articles were most likely written and published by a bot, with one of them even being timestamped to Dec. 31, 1969.

While the two articles managed to be shut down rather quickly after being published, the damage has already been done. Many argued that the incident caused the loss of any credibility Yahoo Finance and Investing.com had.

Mike Dudas, the CEO of The Block, shared his disbelief on Twitter over the incident.

Mati Greenspan, the founder of Quantum Economics and a former senior market analyst at eToro, criticized the publishing process on Investing.com, saying “anyone with an opinion” can write on the platform.

The problem with misleading and fake news has been rampant in the crypto industry since its very beginning. However, these types of articles, written by bots, can wreak more havoc than anything man-made. As many cryptocurrency trading bots open and close trades based on aggregated news titles, articles like the ones published by Yahoo Finance could easily affect hundreds of day trades.

As of now, there’s no evidence that said article affected any trades, but the incident shed a light on the practice, showing that there’s still a long way to go before automated news bots can become a trusted source of news.