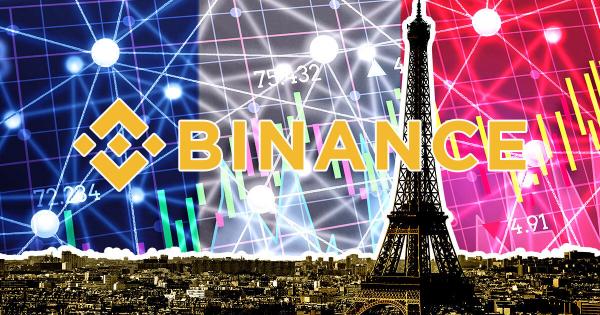 According to a report by Crypto Compare, Binance spot market volumes reached $490 billion in March of this year, capturing 30.2% of the total market.

In a statement on their blog Binance notes that Binance France has been granted a Digial Aseset Service Provider registration by the the Autorité des marchés financiers (AMF).

When asked about the news in France on Bloomberg, Changpeng Zhao, the CEO, and Founder of Binance, expresses his admiration for the country as well as indicating that it is a stepping stone for regulation in other markets,

“This is one of the first G7 countries that’s given #Binance regulatory approval, this opens doors for us to get more licenses in the region and elsewhere in the world”

"This is one of the first G7 countries that’s given #Binance regulatory approval, this opens doors for us to get more licenses in the region and elsewhere in the world" pic.twitter.com/DM9xNhq0O2

A commitment to developing Web3 in France

The announcement makes France the first major country in Europe to allow Binance to operate under regulation. At Paris Blockchain Week, Zhao gave a keynote address where he made his commitment to driving adoption in France clear.

Last year, Binance opened up new offices in Montrouge, a suburb of Paris. Earlier this year at Paris Blockchain Week, Binance positioned itself favorably in France by announcing that Binance would help build Web3 projects at Station F, a start-up incubator in Paris. They also committed to investing 100 million euros in the country.

Crypto in Europe is coming into focus

A global State of Crypto report by Gemini showed that crypto ownership in France is at 16%, which is relatively low compared to other countries. However, the portion of high-income earners owning crypto is the highest in the world in France. Also, adoption among women is high, with more than two in five crypto investors being women.

Heightened scrutiny of cryptocurrencies in the European markets in recent months. The European Parliament voted in favor of new rules that would require companies to report crypto transactions to over 1,000 anti-money laundering authorities.