Member of Parliament Andrew Griffith told the U.K. Treasury Committee that the country should not backtrack on its crypto hub plans over the FTX collapse. 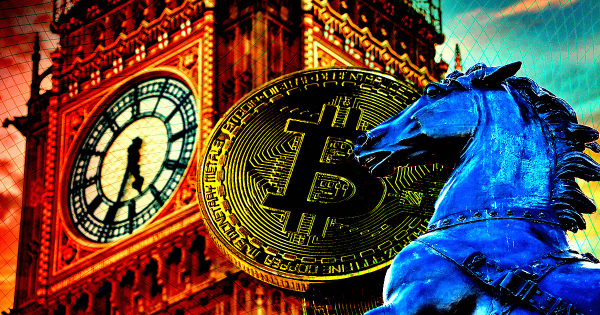 A senior government figure has reaffirmed the commitment to turn the U.K. into a crypto hub, despite the lingering fallout from the FTX disaster.

Since filing for bankruptcy on Nov. 11, a web of sordid details on the Bahamas-based exchange has come to light, including information on mismanagement, fraud, and allegations of collusion in destabilizing Solana competitors.

The knock-on effect has tarnished the cryptocurrency industry’s reputation as a whole.

Nonetheless, in a briefing to the Treasury Committee on Jan. 10, Andrew Griffith, the Economic Secretary to the Treasury, maintained that the government still supports the underlying technology responsible for crypto tokens such as Bitcoin.

Crypto is the future

The committee meeting’s purpose was to discuss the potential risks of supporting a pro-crypto policy, especially in the wake of the FTX collapse.

“a very wide range of forecasts in the market that reveal the benefits to the UK economy from embracing crypto assets and its underlying technology, such as distributed ledger technology and blockchain.”

He reiterated objectives to turn the U.K. into a center for “well-regulated technologically advanced financial systems.” At the same time, this vision “absolutely [has] room” for cryptocurrency and blockchain technology.

Griffith told the committee that the events of 2022 highlighted vulnerabilities and educated people on “some of those practices.”

However, he maintained that it be mistaken to ditch the opportunities presented by the sector, especially with a “well calibrated” regulatory oversight to mitigate a repeat. He added:

“It would be wrong for the UK not to be forward leaning in respect to seeking to make the most of new opportunities and making sure that we have a well calibrated regulatory response that protects consumers.”

As a response, Griffith confirmed that the U.K. has no intention of handicapping the safe use of this new technology. It seeks to “establish a regime” for crypto assets and stablecoins that will bring about growth and further innovation, including “the wholesale use of stablecoins.”

During the discussion, details of the digital pound also came up. Griffiths confirmed a consultation paper was due to be released in the coming weeks.

Soon after he was appointed U.K. Prime Minister, a video of Rishi Sunak emerged in which he talked about G7 countries exploring Central Bank Digital Currencies (CBDCs). He stated that, at this stage, no decisions had been made on whether to press ahead with them.

Public sentiment toward CBDCs is generally unfavorable. For example, a recent tweet from Bitcoin Magazine called CBDCs “slavery,” whereas Bitcoin is freedom.