Trouble eating, sleeping, and being social? You may have crypto addiction Samuel Wan · 1 month ago · 2 min read
News › Culture

Crypto addiction is back in the spotlight following the recent market downturn. 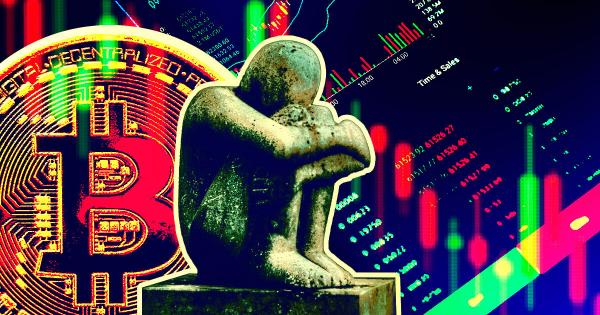 Opening with a snippet from an unnamed addict, the man described his situation by saying crypto dominates his thoughts from waking to before sleep.

“I’m living and breathing crypto. Before I go to sleep, as soon as I wake up, that’s the first thing that’s on my mind. I’m around the clock.”

Host Gustavo Arellano mentioned that the issue had become more pronounced with the recent market downturn.

People are getting obsessed with crypto

Co-host Andrea Chang set the scene by explaining the appeal of cryptocurrency to laypeople, saying it combines people’s curiosity with their desire to make huge sums quickly.

Chang added that anecdotal stories of knowing someone who made a lot of money often pique interest and curiosity. Although both hosts had their doubts about the frequency with which people actually make significant gains.

Referring to a recent article she wrote, Chang recounted the tales of addicts who described obsessive-compulsive behaviors. It was so bad that the problem impacted daily routine and had an adverse social impact in many cases.

“To the point that they are now worried they are addicted, like full-blown addicted to crypto, cannot stop trading, cannot sleep, are having trouble eating, are saying no to social outings with friends or ignoring their families.”

One such case is Sabrina Byrne, a 26-year-old woman from England who first invested in January this year. Chang states that Byrne was staying up till 5 am, checking prices on her phone up to one hundred times a day.

Arellano pointed out that this phenomenon isn’t helped by many crypto apps being phone-based and the fact many people are already addicted to their phones. This is likely worsened by crypto markets being open 24/7 – 365.

Ashley Loeb Blassingame, the co-founder of counseling service Lionrock, likened crypto addiction to gambling in that both affect the same part of the brain.

“Crypto addiction functions the same way as almost any other addiction, and it’s closest to gambling in terms of, you’re getting dopamine hit every time you make a trade, it’s that trill [sic] seeking part of our brain.”

She added that because digital currencies converge on multiple aspects of life, including financial, political, emotional, tribal, and even spiritual, the addiction is all the more controlling.

Generic advice is out there, such as limiting spending and reducing the time involved. But crypto addiction, as with any other addiction, is almost always a symptom of deeper underlying psychological problems.

The answer is seeking professional help from a suitably qualified practitioner.