Senator Warren calls DeFi the most dangerous space in crypto 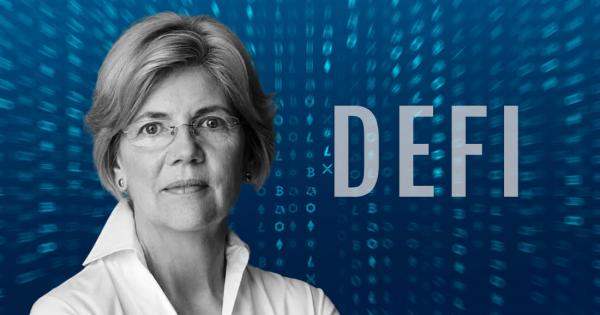 Senator Elizabeth Warren in her recent submission to the US Senate Banking, Housing, and Urban Affairs Committee has urged regulators to place a lid on the burgeoning DeFi sector by paying more attention to stablecoins.

DeFi is the most dangerous space in crypto

While describing DeFi, the U.S Senator said decentralized finance is the most dangerous niche in crypto.

Warren went on to establish the relationship between DeFi and Stablecoins, noting that DeFi would not survive without stablecoins since they are the tools used for transactions on the platform.

“Stablecoins provide the lifeblood of the Defi ecosystem. In Defi, people need stablecoins to trade between different coins, to trade derivatives, to lend and borrow money – all outside the regulated banking system. Without stablecoins, Defi comes to a halt.”

The lawmaker also raised a question on whether DeFi can lead to economic instability and if the space can continue to grow without the input of Stablecoins.

She continued that this Tether report wasn’t verified nor audited by any government agency.

“It’s worse than that. In troubled economic times, people are most likely to cash out of risky financial products and move into real dollars. Stablecoins will take a nosedive precisely when people most need stability, and that run-on-the-bank mentality could ultimately crash our whole economy.”

Warren went on to describe stablecoins as not always having what they claimed to be and that if these issuers were to crash, it could crash the economy.