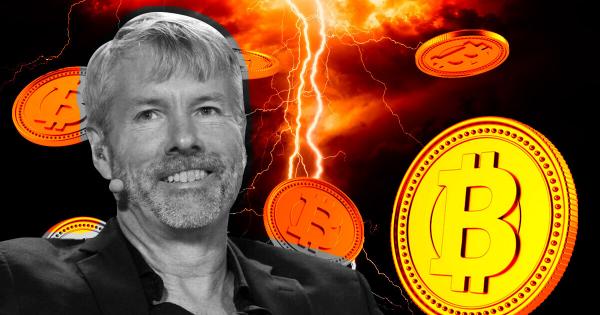 Being a vocal Lightning network advocate, Saylor replied to the pool with a “Yes” and offered to send some bitcoin sats to winners of his Lighting meme contest.

The correct answer is Yes, and I will make three more transactions of 1,000,000 sats each to the 3 posters of the most liked #Lightning⚡️ memes in the comments below. https://t.co/qXZ90q4Ly9

The contest which ended on Oct. 5, saw @ShireHODL.@NEEDcreations,& @publordhodl emerge as the winners. Saylor sent each of the winners 1 million sats (approx. $203) via the Lightning network.

Congratulations are in order to @ShireHODL, @NEEDcreations, & @publordhodl, the winners of our #Lightning⚡️ meme competition. Each has received 1,000,000 sats, delivered via the Lightning network in a few seconds. https://t.co/wiBTW6jhgk

@ShireHODL said he was looking to digitize the meme experience and turn his stats into a digital collectible.

Next steps: Frame with print of Saylor’s original tweet, my meme, announcing winners tweet and this satscard. Should do the same @NEEDcreations and @publordhodl. Has anyone else ever received sats from Saylor? Could be a collectible. Only three 😁

Since leading MicroStrategy to purchase its first Bitcoin on Aug. 11, 2020, Saylor has been bullish on any infrastructure proven to help bitcoin reach mass adoption.

Saylor has maintained that the Bitcoin Lightning Network is the most important technology being developed today as it has the potential to scale bitcoin to billions of customers globally while leveraging the time-tested security of the Bitcoin layer.

Saylor’s MicroStrategy is working to develop a Lightning Network-based platform that will offer a Lightning wallet, enterprise servers, and enterprise authentication.