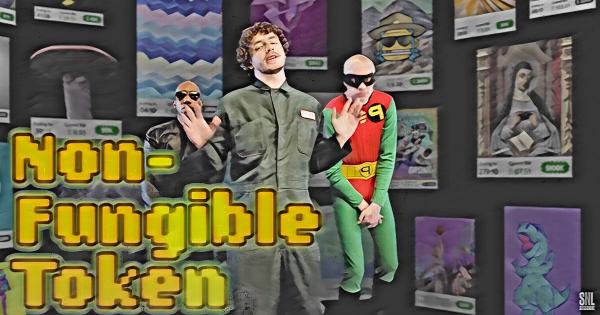 Popular American comedy show “Saturday Night Live” has added its own two cents to the non-fungible token (NFT) mania, hilariously explaining “what the hell’s an NFT” in a new skit published today.

In the video, Pete Davidson, Chris Redd, and singer Jack Harlow took their turns performing a rap explanation of NFTs, a special type of non-interchangeable tokens that have become the latest “hot stuff” in the crypto industry.

Davidson, parodying Eminem’s hit song “Without Me,” started off by noting that NFTs are like a “real-life Monopoly” where “everyone’s making so much money.”

Chris Redd, dressed like Morpheus from “The Matrix,” followed up by listing various examples of what can be attached to an NFT. Redd elaborated:

“Non-fungibles, GIFs of Ron Funches eating Lunchables or pics of Colin Jost’s face, very punchable. Digital images of Digimon doin’ scrimmages or a pic of a nun with a Nintendo Switch.”

“That just was a list of complete nonsense,” argued Kate McKinnon, who played the US Treasury Secretary Janet Yellen in the sketch, after hearing a few more absurd examples.

Harlow then went a little bit more in-depth on the technical side of NFTs, explaining that they are minted on a blockchain, or “a digital ledger of transactions.”

“Non-fungible means that it’s unique, there can only be one like you and me,” the rapper pointed out, adding, “When it’s minted you can sell it as art, and this concludes my rapping part.”

While intentionally superficial for comedy purposes, the sketch still managed to cover the most fundamental aspects of NFTs. Namely, that such tokens are one-of-a-kind and some people are prepared to pay outrageous sums of money for them.

And with coverage from major mainstream shows such as SNL, the NFT craze shows no signs of slowing down so far.

Explore all NFT coins and NFT news on CryptoSlate.