Russian-Ukraine war could hasten global cryptocurrency adoption, but not in the way you think Samuel Wan · 3 months ago · 2 min read
Russia · Ukraine› Adoption

Russian-Ukraine war could hasten global cryptocurrency adoption, but not in the way you think 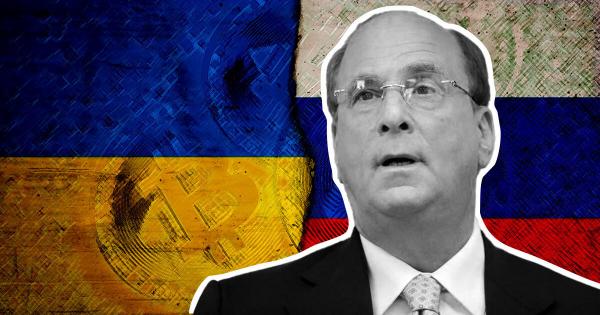 In a letter to shareholders on Thursday, Blackrock CEO Larry Fink wrote Russia’s invasion of Ukraine has disrupted the world order and put an end to globalization.

The pandemic had already triggered a sea change in consumer demand, employment dynamics, and supply chain bottlenecks. But since the outbreak of war, the situation has further deteriorated, leading to spiraling inflationary pressures.

Central planners now face the difficult decision to live with higher inflation or slow economic activity and employment, which is already at a breaking point.

By forcing countries to reevaluate their currency dependencies, Fink said this leaves the door open for global cryptocurrency adoption. But reading between the lines, Fink isn’t referring to an existing, decentralized chain.

Central bank digital currencies (CBDCs) are different from decentralized cryptocurrencies, such as Bitcoin, in that they are backed by the national bank and government of the country they represent.

CBDCs were prominent even before the war and health crisis, with the Bank of International Settlements saying as many as 80% of central banks are actively engaged with CBDC research.

Notable projects include Sweden’s e-Krona, Thailand’s digital baht, and the digital dollar. But ahead of the pack is China’s digital yuan, which is already being trialed at various test cities and economic regions and is widely expected to be the first major economy CBDC to roll out.

Fink sees a “global digital payment system” as the solution to cross-border settlement. He says such a system could be advantageous in bringing down costs, for example, in expatriate workers being able to send more money to families back home.

“A global digital payment system, thoughtfully designed, can enhance the settlement of international transactions while reducing the risk of money laundering and corruption.”

Writer Emmanuel Awosika refers to CBDCs as “a very bad idea” as the risks include encroachment on privacy, single point of failure, risk of data breaches, unstable monetary policy, financial discrimination, which is tied to the “weaponization of money.”

While Fink mentions lower costs as a plus point, CBDCs still represent the same old system (particularly concerning unstable monetary policy) but repackaged in a digital form, with tighter controls in place than before.

U.S Congressman Tom Emmer recently introduced a bill to stop the Federal Reserve from issuing a digital dollar. He labeled the project a form of digital authoritarianism that would undermine financial privacy and individual freedoms.

Congressman Emmer urged his fellow members of Congress not to further consider devices “that would destroy the fabric of our nation.”